By brooklynheightsblog on March 29, 2010 11:44 am in Landmark Preservation 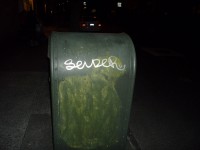 The city’s new law requiring merchants to use see through roll down gates to curb graffiti is now in effect.  However, one Brooklyn Heights merchant, who already has such a gate, thinks it won’t make much of a difference. Your Nabe:  Ceaser Molina, the manager of Michael Townes Wines and Spirits, at 73 Clark Street in Brooklyn […] 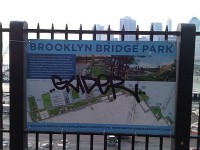 This in from Judy Stanton, Executive Director of the Brooklyn Heights Association: The 84th Precinct captain just stopped by to tell me that the graffiti taggers using Rex and Guder, whose tags were found on public and private property all over the north Heights, have been arrested. Credit goes to the arresting officer, Freddy Ahmetaj, […]

A Graffiti Goon using the “tag” GUDER is on a rampage in the North Heights. BHB community member Andrew Porter sent us photos of some of this social misfit’s “art” sprayed on various surfaces around Hicks Street including the side of the lovingly restored 68 Hicks Street. 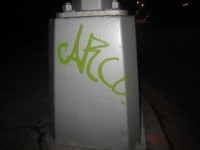 From a BHB Tipster comes a lead on the “gang” who may be responsible for the recent outbreak of (really lame) graffiti in Brooklyn Heights.  This report comes from Cranberry Street: Hey Homer, thought I’d pass this by you. I was walking the dogs Friday night around midnight in the North Heights when I saw […]

In response to comments about a graffiti spree in the neighborhood, we spoke to someone at 311 about the process that takes place when someone calls them about graffiti.  When graffiti on a building is reported to 311 by a non-owner of the building, 311 will pass the information along to the appropriate agency (typically the Department […]

We snapped this photo of some lame graffiti on the driveway door of the “Moonstruck House” at 19 Cranberry Street this morning.  It, like many other spots in Brooklyn Heights, seems to be the latest victim of a lame graffiti spree in the area. BHB super-commenter Publius observes: Anyone else notice a significant uptick in […]

A Prayer for the People of Ukraine

As an 80’s kid growing up under the specter of the Cold War coupled with my father’s untimely death in 1982, my fascination with Russia and my ancestry ran deep. The Patriarch of my uncommon maiden name, my paternal Great-Grandpa, came to America solo at age 17 in 1902 from a village named Biyalikamen. It is […]

Update: Sahadi’s tells us they had no windows damaged. “Our neighbors had a little graffiti but our windows and façade had zero damage.” The Bklynr story includes a photo of a boarded-over window at Urban Outfitters, which is on the opposite side of Atlantic from Sahadi’s. Bklynr reports that on Tuesday night rioters smashed windows […]