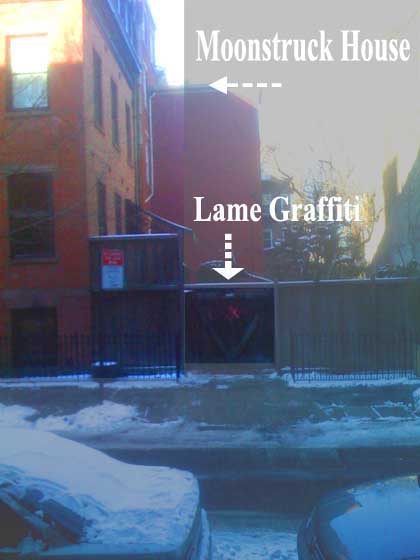 We snapped this photo of some lame graffiti on the driveway door of the “Moonstruck House” at 19 Cranberry Street this morning.  It, like many other spots in Brooklyn Heights, seems to be the latest victim of a lame graffiti spree in the area.

Anyone else notice a significant uptick in grafitti? I was noticing it for the past few weeks, and on my way home recently documented by cell phone camera over 10 separate tags on stop signs, walls, gates, garage doors, and several on houses within a two block radius in the North Heights.

What, if anything, has worked in the past to reduce the tagging? I’ll be doing my part this weekend by going to the hardware store to buy some paint to cover the tag that has suddenly appeared on my property. I just noticed it a few minutes ago when taking out the trash.

Homer, if you think it’s useful, I have lots of shots of tagging in the nabe.

Besides removing as soon as possible to avoid attracting repeats, you should call 311 to report (or 911 if you see it in progress).

The NYPD has a brochure with a little more info:
http://tinyurl.com/a25o2d

The 84th precinct has someone assigned to graffiti issues:
Special Operations Lieutenant – 718-875-6288

It’s probably a good idea to report to the BHA as well (718-858-9193; bkhtsassoc@aol.com) because they can help coordinate reports from multiple people and follow up with the police if necessary.