The giant American elm tree that has graced the courtyard of the Mansion House at 145 Hicks Street was knocked down by Hurricane #Irene overnight. The elm, which faced the axe four years ago was beloved by many in Brooklyn Heights.
VIDEO AFTER THE JUMP. 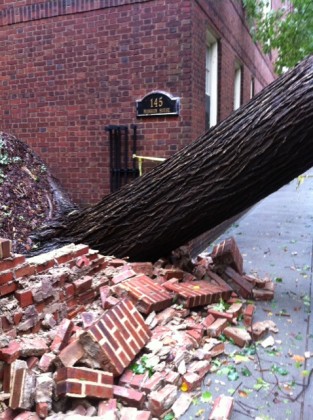 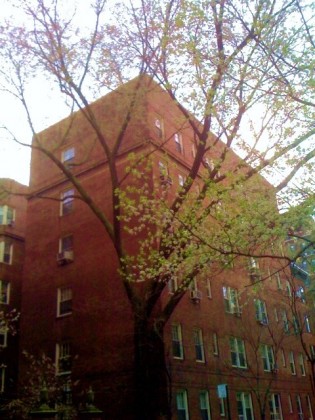 The LA Times covers the downing of the elm:

LA Times: Jacqueline Doyle was among those out mourning the tree and gaping at the spectacle. She offered a bit of trivia: The building into which its top fell was featured in the 2008 film “Burn After Reading,” starring Brad Pitt and George Clooney. “They have life,” she said of the trees that shade the neighborhood. The gracious brick building where the tree long stood –- residents have estimated its age at more than 80 years -– is one of the few that has its own courtyard.

The elm was the crowning glory of the entire street, said Sebastian Lamicella, who in 2007 threatened to chain himself to the tree after the debate erupted over whether to remove the tree.

For a time, it seemed the tree’s fate was sealed after Mansion House’s co-op board voted in July 2007 to cut it down amid concerns about its roots and about the possibility of a lawsuit if a branch fell and caused damage or casualties. “So many of the neighbors came out and protested that they really saved the tree,” said Lamicella, noting that it was one of few American elms remaining in the city.

“We really fought for it to stay up, but God had different plans,” he said, shaking his head and walking away.