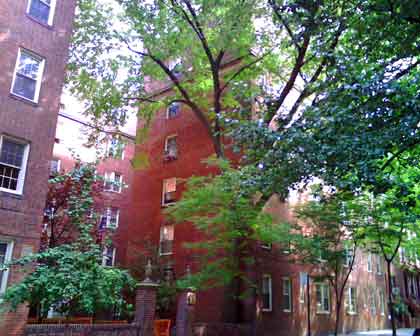 The New York Times reports on the controversy surrounding the American elm at 145 Hicks Street (Mansion House). While the lively conversation on BHB is not mentioned directly (well at least Sewell Chan loves us) you'll notice many familiar names in the article:

New York Times: The Giant in the Courtyard…: “I love my tree,” said Marisa Scali, a restaurateur who stopped to talk on her way inside. Ms. Scali, who has lived in the building for four years, said she had chosen the neighborhood in part for its greenery. “If it’s a matter of dollars,” she added, “they should really try to preserve this piece of history.”

Sebastian Lamicella, a payroll manager who is a 33-year resident of the Mansion House, agreed. “I mean, look at this thing,” he said, standing outside the building on Monday night and staring up at the tree’s translucent canopy, which extends over Hicks Street. “There’s not one branch on this tree that is dying or sick.”

But they have not promised to preserve the elm, a fact that is sure to enrage people like Fortune Elkins, a technology executive who lives down the street. “Anything that they do that affects the character of this block directly affects my investment,” she said, batting blue eyelashes. “If they kill this tree, I’m suing.”