Seasons, the new restaurant at the former Bread and Butter location, 46 Henry Street (between Cranberry and Middagh) officially opens tomorrow, Monday, March 21. It had a “soft opening” on Thursday evening and Karl, our man with cam (and palette) attended. He reports: “The food is tremendous. The chef definitely knows what he is doing.”

Seasons is the New Name of Bread and Butter

As previously reported, Bread and Butter [46 Henry Street] is being taken over by the owners of Picket Fence in Ditmas Park. BHB has learned that the name will be changed to Seasons. No word on an opening date yet. Karl Junkersfeld ventured out into the far away and mystical land of Ditmas Park to […]

Is Bread and Butter Toast?

Sources tell BHB that Henry Street eatery Bread and Butter (nee Le Petit Marche) has served its last dish of “American comfort food”. One report has the operators of Picket Fence in Ditmas Park taking over the operation. Bread and Butter [46 Henry Street] debuted in January 2010, flipping its name and menu to American […]

So much for Bread & Butter being the Phoenix rising from the ashes of its former incarnation Le Petit Marche.   Already facing an uphill battle after last year’s missteps regarding several DOH violations and what appeared to be a cover-up, Bread and Butter needed to come strong to the hoop to regain neighborhood loyalty. While […] 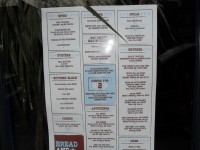 First Look at Bread and Butter

Many BHB commenters have checked out the new incarnation of  Le Petit Marche called Bread and Butter [46 Henry Street].  Our Karl Junkersfeld, who has taken a peek at the menu, taken photos but has not tried the food yet, comments:

Le Petit Marche Will Re-open as Bread and Butter

With the end of 2009 also came the end of Le Petit Marche. The three-year-old French restaurant shuttered on New Year’s Eve, and the owners said the space will re-open under new management as early as this weekend. The new restaurant will be called Bread and Butter, and specialize in American comfort. Dishes will include […]