First Look at Bread and Butter 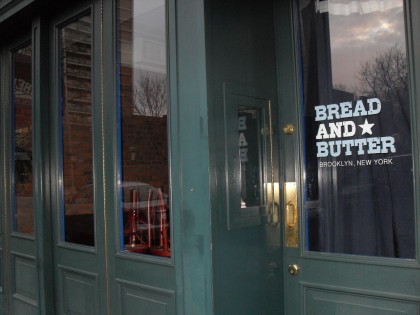 Many BHB commenters have checked out the new incarnation of  Le Petit Marche called Bread and Butter [46 Henry Street].  Our Karl Junkersfeld, who has taken a peek at the menu, taken photos but has not tried the food yet, comments:

Bread and Butter opened Saturday and was packed according to reliable sources. The menu is eclectic and with many dishes guaranteed to stick to the ribs, for example the Southern Fried Chicken, mashed potato option for two. Looks like it has a good mix of meat and fish dishes and prices are reasonable. Did anyone try it out yet? Below is link to menu: 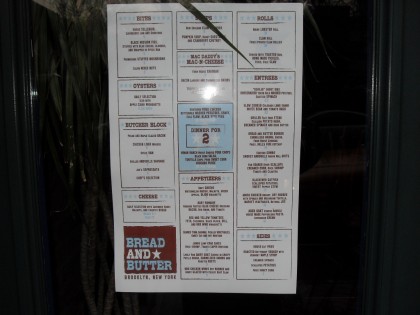 We have a winner.

A warm friendly vibe will great you followed by good service and a somewhat eclectic menu.  For those in the immediate area, imagine Buttermilk Channel meets Jack the Horse, with a bit of Louisiana thrown in.

We had the clam chowder–fresh and delicious. Perhaps the best I’ve had outside of Maine.

There are a nice selection of small plates, and we tried the speck wrapped figs with almonds (sometimes called Alterboys), which were flavorful. Also tried the bacon with pecans and maple glaze, served with mustard, which is interesting and tasty.

I was about to go for the lobster roll, but wasn’t in the mood for mayo, so I tried the burger, which was perfectly cooked to order with quality beef.  Great fries!  Shoestring, crisp and delicious.

My sweetheart had the Amish chicken, which is nicely blackened, juicy, and a bit sweet, with a flavorful spinach and mushroom tortilla. Quite good.

We tried the butterscotch pudding for desert, which was a smooth end to the meal.

I’d rate Bread and Butter somewhere around 3.75 stars, but will round up. I hope they have a nice run, and am glad they’re adding some variety and good standards to the Heights dining scene.