Taperia Closed Indefinitely As Eamonn’s Promises Comeback In Its Place

The shake-up of the Montague Street restaurant scene continues. Taperia, the Spanish tapas restaurant and bar located at 132 Montague Street that opened in October 2013 to much fanfare appears to have closed indefinitely. A handwritten sign taped to the door reads: “Closed until further notice. Sorry for the inconvenience.” Meanwhile, a large banner hanging on the front window promises the return of Eamonn’s, presumably referring to the longtime local favorite Irish pub formerly located a block away at 174 Montague Street, which closed its doors back in early 2012 to make way for a high-rise condo development. 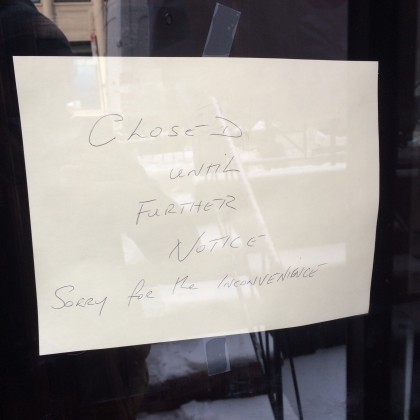 Right now it’s difficult to say exactly what is happening to the space at 132 Montague. Calls to Taperia yielded the standard restaurant answering machine message. Calls and emails to Philip Henn and Nasser Ghorchian, the co-owners of Taperia, also went unanswered. Manhattan Beer Distributors, which is the only contact listed on the new banner for Eamonn’s, said they weren’t able to discuss their clients. A hostess at the unrelated Eamonn’s Bar & Grill in Times Square said her restaurant didn’t have anything to do with the new banner.

Whatever becomes of 132 Montague, the space has long been a contentious one for Brooklyn Heights residents, with its Henry Street-facing backyard going from a memorial garden in the 1980s to a trash-filled lot until neighborhood cleanup efforts made it fit for Taperia’s outdoor patio garden.

The recent activity in the space follows the abrupt closure of Connecticut Muffin at 115 Montague after 19 years, and the impending arrival of Gramercy Park staple Friend of the Farmer in the long-vacant spot at 76 Montague. The latter development has drawn its own share of controversy recently with reports that Friend of the Farmer may remove the antique anchor on the street outside. Still, Montague Street BID executive director Brigit Pinnell isn’t shocked by the changes. “January and February can be active months, changing tenancies are not uncommon,” she told BHB, adding she didn’t have further information on the situation Taperia.