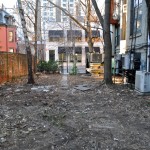 After reporting January 20 about the filthy dumping ground teeming with trash, glass and vermin on Henry Street behind Montague Street’s Andy’s Chinese, Dashing Diva and Heights Vision, the gods have shone down—and cleaned the backyard space.

More likely, it was the effort of Bobby Cruz, who is hoping to open a tapas and wine bar beneath Heights Vision this spring, who took it upon himself to bag a good deal of the garbage of his own accord in January. He told the Brooklyn Paper—which led with the story about the garbage dump—that he intended to tidy the space until it was clean.

When we inspected the grounds January 20, located across from Corcoran real estate on Henry, it was easily accessible through an open iron gate—and remained so January 31. For years, residents have complained to landlords and business owners, to no avail, as it continued to accumulate garbage strewn & stacked at liberty. But as of Tuesday, it was largely free of garbage and clutter, albeit with a few remaining broken bottles here and there.

Cruz says his intention is to open an outdoor space behind his potential tapas bar. Now, the roomy, open courtyard that backs up to Our Lady Lebanon Cathedral on Remsen Street, looks like it could truly become a sweet spot. 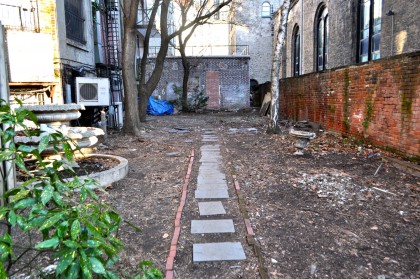