George and Abe Both Knew the Nabe

As we’ve noted before, in late August of 1776 General George Washington spent several days and nights here in Brooklyn Heights. It can’t have been a pleasant time for him: his Continental Army fought the British for the first time, and suffered defeat. Afterward, the weather was bad, though that would prove to be a blessing. At the end, he was able to evacuate his forces across the East River to Manhattan without further loss of life.

Though he certainly returned to New York City after the Revolutionary War was won–he gave a farewell address to his officers at Fraunces Tavern in what is now downtown Manhattan, and the City served as the U.S. capital during his presidential administration–there is no record of his having returned to Brooklyn Heights. Still, it’s not hard to imagine his taking a boat across the East River, climbing the bluff to the Heights, and surveying the scene of his early tribulation, now a peaceful village. 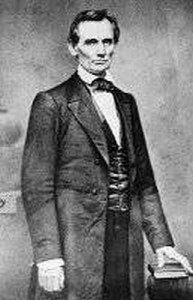 Abraham Lincoln certainly did enjoy the view from the Heights; indeed, he is quoted as saying, “There may be finer views than this in the world, but I don’t believe it.” Lincoln came here in February of 1860, before being elected president, to hear a sermon by the great abolitionist preacher Henry Ward Beecher at Plymouth Church. The day after his visit to the Heights, and hearing Beecher preach, Lincoln delivered a speech at Cooper Union, in Manhattan, that is credited with having launched his presidential campaign. During that visit to New York, he had the portrait shown here taken at the studio of the photographic pioneer Matthew Brady.

Portrait of Washington by Charles Wilson Peale (1779) (http://www.metmuseum.org)
Portrait of Lincoln by Matthew Brady/Library of Congress