Washington Was Here, 234 Years Ago 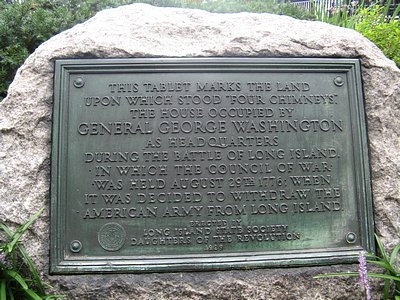 On this day in 1776, what would prove to be the largest battle of the Revolutionary War happened just to the east of Brooklyn Heights, which was then the site of the principal encampment of the Continental Army on Long Island. The battle was originally called the Battle of Long Island, as much of it took place outside the boundaries of what was then Brooklyn, though some contemporary historians have taken to calling it the Battle of Brooklyn, or even the Battle of Brooklyn Heights. In it, the American forces were soundly defeated, with considerable loss of life, though in its aftermath, the surviving Continental troops made an escape that seemed miraculous.

Early in the morning of August 27, British forces that had landed at Gravesend Bay several days earlier began to advance toward Washington’s troops, many of whom were deployed in what is now Prospect Park and near the present Green-Wood Cemetery, on high ground from which they could defend the approaches to the Heights. The British General Howe sent some of his forces directly toward these positions from the south, but went with the bulk of his force to the east, to outflank the American positions. The tale of how Howe forced a tavern keeper and his son to guide his troops through what was then called Jamaica Pass is told by Brooklyn Daily Eagle writer Phoebe Neidl in her blog, Brooklyn Before Now.

Later in the day, there was fierce fighting around what became known as Battle Pass in present day Prospect Park, followed by a valiant holding action by some 250 Marylanders at the Old Stone House, which allowed most of the American troops to escape to the Heights. Washington is believed to have observed the action at the Old Stone House from the summit of a hill, later leveled by the British, that stood where the former bank building that now houses Trader Joe’s is located; the flagpole atop that building is said to mark the height of the hill. While watching the Marylanders’ stand, Washington is reported to have said, “Good God, what brave fellows I must this day lose!”

Howe did not immediately press his advantage by continuing in pursuit of the retreating Americans, but rather had his troops dig in facing the American positions. Manhattan was not yet in British hands, but Howe no doubt anticipated that the Royal Navy fleet, then anchored near Staten Island, could advance up to the East River and trap the Continentals on the Heights. On the 28th, he had his troops advance slowly toward the American lines, while Washington brought reinforcements across from Manhattan. Late in the day, it began to rain, which stopped the British advance. Bad weather continued on the 29th, when Washington and his subordinate generals met and decided to retreat to Manhattan, a meeting that is memorialized by the plaque, at the Montague Street entrance to the Promenade, in the photo above. (Note: I’ve heard some dispute over whether this plaque marks the actual location of the conference.) 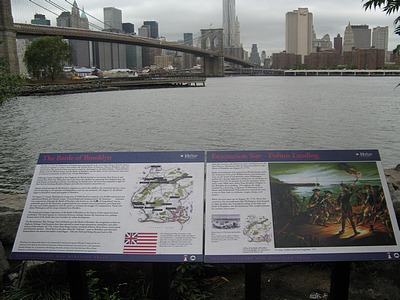 The evacuation of the American troops began late at night on the 29th and continued into the morning of the 30th. Although the evacuation had not been completed by daybreak, fog fortuitously concealed the troops’ departure from their positions and the boats carrying them across to Manhattan. The marker in the photo above, in Brooklyn Bridge Park near the foot of Main Street in DUMBO, commemorates the Battle and the evacuation.

Update: The Old Salt blog has an interesting piece on how a regiment consisting of sailors and fishermen from Marblehead, Massachusetts skillfully crewed the boats that ferried Washington’s troops across the East River on the night and morning of August 29-30, 1776. These same troops would crew the boats that carried Washington and his army across the Delaware to victory at Trenton the following Christmas eve.

Storm Troopers Invade DUMBO
Cast Your Vote: Movies in the Park on September 2!