The lot at 27 Cranberry Street looks like it’s being prepped for construction as boards were being put up around its perimeter yesterday.

Developer Louis Greco purchased the lot over two years ago. The project has not been without controversy – the LPC asked for the original plans to be rethought and neighbor Elisabeth Cunnick of 25 Cranberry aired her grievances in a New York Times profile in April.

In 2011, architect/former BHA prexy Tom ven den Bout told Brownstoner this about the design of the planned structure:

…the 5,000-square-foot house is “massed to appear smaller from both the street and the rear gardens” and “rendered in humbler material in a less formal composition.” There are a bunch of specific changes—including the use of roman brick rather than brownstone and zinc replacing bronze for the metal cornice and bay—that helped it pass muster with Landmarks this time around; click through for all of them.

He also gave a detailed description to BHB:

Van den Bout and lead architect Martin Santini are not releasing images until after the LPC presentation. However, van den Bout tells us that “despite rumor” the facade will be about 30% glass adding that neighboring buildings are in the 15% – 25% glass range. All glass in the facade will be windows and a bay window. The rest of it will be “actual brownstone – heavy, dimensionally cut stone – not stucco or veneer.” The stone will be taken from the ”same quarry that supplied material for much of the city back in the 1800′s [that has been] recently re-opened.” 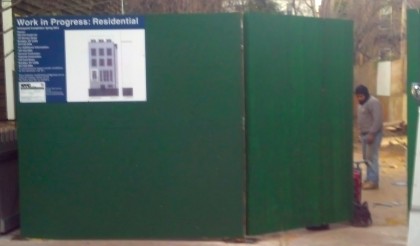