The Brooklyn Public Library has received seven responses to its Request For Proposals to construct a new Brooklyn Heights Branch Library, to be incorporated in a larger commercial or residential structure.

Most of the proposals would provide 20,000 square feet of library space; Proposal A’s library would have 31,192 square feet, and Proposal E’s 30,000. The proposed buildings range in height from as much as 551 feet (Proposal F, which has a possible alternative height of 455 feet, still taller than any other proposal) to a minimum of 285 feet (Proposal A). 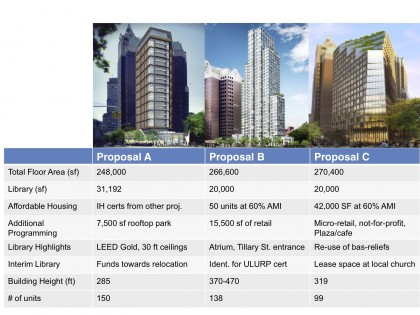 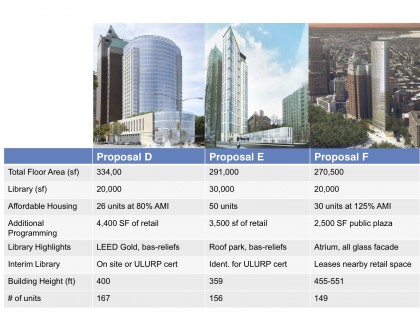 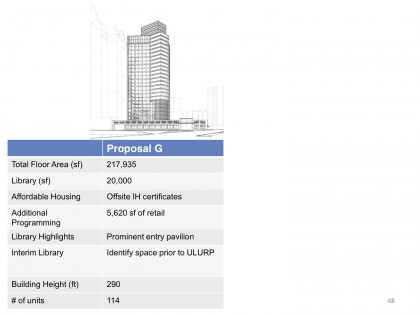 The proposals vary in how they will make space available for an interim library during demolition and construction. Proposal A offers to make funds available for relocation; Proposal C says it will lease space at a local church (not specified); Proposal F says it will lease nearby retail space; the others all say they will identify an option before the required Uniform Land Use review, although Proposal D also includes “on site” as a possible option. Proposals B, C, D, E, and G include retail space. Proposals A and E include rooftop parks accessible to the public, while Proposals C and F provide public plazas. All make some allowance for affordable housing, either on site (Proposals B, C, D, E, and F) or at another location (Proposals A and G). Proposals C, D, and E would preserve the bas reliefs from the existing library building’s facade.

Addendum: The identities of the developers submitting the proposals have not been made public, but the Wall Street Journal reports that Forest City Ratner is not one of them.