When The New York Times pens a story on the revitalization of Downtown Brooklyn’s Fulton Mall, it heralds a watermark moment: sort of like, if the Times sniffs it as a reality, the revival has got to have credence. Its August 28 piece announced “National Retailers Discover a Brooklyn Mall.” Mind you—to toot our own horn—the Brooklyn Heights Blog has been heralding the Mall’s shift from low-budget chains to national retailers month by month, and more recently, week after week, for the past year.

The Downtown Brooklyn Partnership’s $300 million public improvements initiative to remake the once-flailing shopping mecca got the ball rolling at the beginning of the decade after 30 years of neglect, with newly paved streets and traffic patterns, wider sidewalks, new streetlights and bus terminals. Much credit also has to go to Shake Shack, whose opening in December 2011 was perhaps the landmark launch of a chain willing to take a 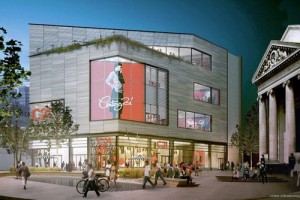 chance on the promise of Fulton Mall.

Meanwhile, the ink keeps on flowing about Downtown Brooklyn’s rejuvenation. Racked posted a piece, “National Chains Are Still Racing to Open on Fulton Street,” which discusses Raymour & Flanigan furniture store’s 28,000 sf lease for the second floor of 490 Fulton Street, scheduled to open in February and notes an undisclosed developer that’s close to signing a 45,000sf lease with a major apparel retailer.

In addition, The Real Deal wrote about “How Fulton Street is attracting national retailers,” pointing out that Century 21 is the first department store to open in the neighborhood in some 50 years. The Daily News noted the area’s revolution, “long home to neon-lit sneaker shops, hot dog stands and cell phone stores” to its reincarnation as “state-of-the-art Brooklyn, complete with skyscraping condo towers and flowery landscaping along Flatbush Ave. Extension.” Curbed remarked, “Fulton Street Mall Gets Popular,” while The New York Observer profiled Michael Weiss, CEO of Express, which opened a new outlet in August at 490 Fulton Street. Even AP alerted its press members about the in-the-works story. And let’s not forget one of the primary reasons for the area’s boom: a revolution in Downtown highrise housing.

BHB minions, we are indeed eyewitnesses to a truly historic urban revival—just steps away from our homes in Brooklyn Heights—which is destined to forever change the texture of the neighborhood… literally week by week. Hey, who needs Manhattan, anyway?