A shiny new Express store at 490 Fulton Street along Fulton Mall has opened in the rapidly gentrifying Downtown Brooklyn shopping destination. Michael Weiss, CEO of the men’s and women’s clothier and a Brooklyn native, was present for the festive “block party” opening last Wednesday. He tells the New York Observer that he began his career as a management trainee and associate buyer right along the corridor, at former Fulton Mall department store Abraham & Strauss, now the home of Macy’s.

Express occupies 10,000 square feet in a building that was originally also going to house a 40,000-square-foot Filene’s Basement/Syms hybrid, before the chain went bust. Still planned: dorms on the upper floors for Long Island University students.

The Observer reports that Weiss grew up in Fort Greene. He recalls Fulton Mall in the late 1960s and early 1970s: “It was just the greatest place to be. So much activity. So much action. Brooklyn was it,” that is, before Brooklyn, along with the rest of the city, began its precipitous decline into bankruptcy and decay. “It was very different than it is today. It was very optimistic. Brooklyn was quite a place in those years. It was a place of expectation and aspiration. It was solidly middle class, everyone sort of felt like they had a shot if they worked hard,” he adds.

Weiss says he always believed Fulton Mall would gentrify: “I knew that street had to be rejuvenated at some point. The big question was when a company could afford to get into the place and make it work. You don’t want to be too early, and you don’t want to be late. I really think now is the time.” 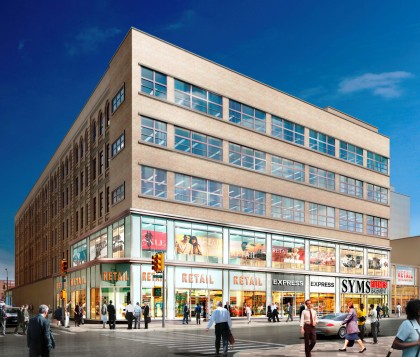 Barclays Center: What Does It Mean For 21st-Century Brooklyn?
Web Series Checks Out “Garden Room” on Joralemon Street