Seems like the roof repairs free spirit/owner Dr. Austin Moore commissioned for the roof of 194 Columbia Heights back in 2009 aren’t holding up. Two years after promising the neighborhood would be “surprised” by the improvements he planned, there seems to be more problems at the decaying townhouse.

Columbia Heights resident Vivian Shevitz sent us photos of a breach in the roof’s gutter that is causing buckets of rainwater to fall dangerously to the street below. However, what appears to be a relatively simple repair under normal circumstances may take a very long time at 194 Columbia Heights. 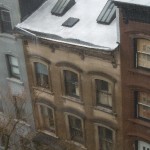 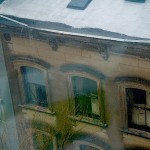 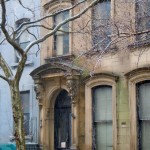 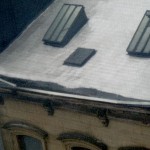 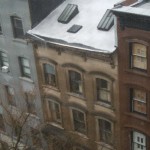 Some background on the property as reported by BHB in 2009:

The long-neglected townhouse has sat unused for nearly a decade, and is locked in what sources say is a bitter divorce dispute between its owners. In the meantime, the house’s windowsills and cornices are crumbling.

According to public records, it was last sold in 1986 to Austin Moore, a psychiatrist with an office nearby at 123 Henry Street. Dr. Moore did not immediately return a call for comment, but recently told the Eagle that he would “probably surprise everybody by doing some improvements this spring.”