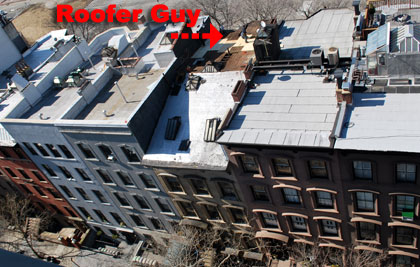 Workers are replacing the roof at 194 Columbia Heights this week after huge wind gusts blew chunks of debris off the roof and onto the street below last week.

The roofers started work on Tuesday and one worker estimated that the project could take all week, depending on the weather.

On Feb. 13, emergency responders closed the street after 65-mph winds blasted apart four or five pieces of the roof, which rained down onto the street, said an eyewitness who works across the street at The Standish.

The Department of Buildings was at the scene on Friday to inspect the damage after getting a complaint from police officers that were on the scene.

The long-neglected townhouse has sat unused for nearly a decade, and is locked in what sources say is a bitter divorce dispute between its owners. In the meantime, the house’s windowsills and cornices are crumbling.

According to public records, it was last sold in 1986 to Austin Moore, a psychiatrist with an office nearby at 123 Henry Street. Dr. Moore did not immediately return a call for comment, but recently told the Eagle that he would “probably surprise everybody by doing some improvements this spring.”

He also noted that he would be fixing up the roof.