Final “Herd for the 33rd” Debate Produces Little Disagreement, Except on Lampposts 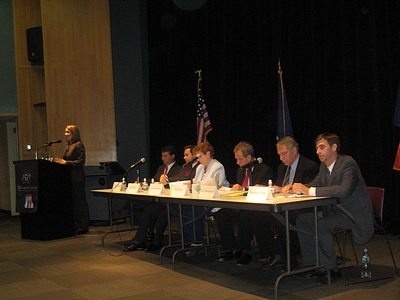 Last night was the final debate, before next Tuesday’s primary election, among the candidates for the 33rd District City Council seat being vacated by David Yassky. Six of the seven showed up for the event at St. Francis College auditorium; Isaac Abraham was unable to attend because of a wedding. Responding to a series of questions put to them by moderator and NY1 political reporter Grace Rauh, the candidates found little on which to disagree. All love mom and pop stores and want to save them; all hate condos in Brooklyn Bridge Park; all want to stop Atlantic Yards and Dock Street DUMBO; all want more community participation in planning and zoning decisions; and all think the School Construction Authority is something out of Kafka by way of George Washington Plunkitt. One question did arouse audience participation, if only largely evasive answers from the candidates. It was: given that all the candidates opposed funding Brooklyn Bridge Park from revenues generated by residential construction on park land, assuming that, following completion of the work presently underway on Piers 1 and 6, no more funds were available for work on the remaining section of the Park, would they, “yes” or “no”, favor stopping work and leaving the Park incomplete? As soon as Ms. Rauh read the question, several members of the audience shouted “That’s an unfair question!” and “False choice!” The candidates largely agreed that it was unfair and refused to answer, except Ms. Simon, who wryly noted that, if there’s no money, nothing could be done. Later, when asked what funding mechanism they favored for the Park, most of the candidates said they supported State Senator Squadron’s plan, which would rely on a dedicated portion of greater tax revenues resulting from increases in the value of properties in the Park’s vicinity. Mr. Biviano noted that the Squadron proposal relates only to funding the Park’s maintenance, not capital construction.

In discussing ways to save and promote small business, the candidates were unanimous in supporting some form of commercial rent regulation. Mr. Diamondstone also advocated giving storefront tenants a right of first and last refusal when a landlord puts a building up for sale. Mr. Baer proposed use of “local currency” redeemable only for purchases from local stores, which he said has succeeded in some New England communities. Mr. Thies noted that many business start-ups are not storefront businesses but rather freelance operations that do not have a bricks and mortar presence. He said the biggest obstacle for these businesses is the City’s unincorporated business tax. The threshold for this tax has been raised to $100,000, but Mr. Thies advocates eliminating it completely.

Asked whether, as a City Council member, he would act independently of his former boss, State Assemblyman and Brooklyn Democratic leader Vito Lopez, Mr. Levin said he would be guided by his own moral compass. Asked what, as a City Council member, he could do about health care, which he has made a central issue in his campaign, Mr. Biviano pointed out that the City’s charter empowers it to protect the health of the citizenry. San Francisco, he noted, has attempted to establish its own health care program, although it is facing a challenge under the federal ERISA statute.

During a “lightning round” in which candidates were asked to give “yes” or “no” answers, all said that some tax increases would be necessary to meet the City’s fiscal needs, but Mr. Biviano said he would address the issue of corruption first. Asked whether some limit should be imposed on the number of double-deck tour buses entering the neighborhood, all said “yes” except Mr. Biviano, who said, “Electric buses.”

One question did elicit some disagreement among the candidates. Asked if $600,000 for installing historic lampposts in the Heights is an appropriate use of funds, the answers were: Levin, “Questionable”; Diamondstone, “Yes”; Baer, “No”; Simon, “Yes”; Thies, “No”; Biviano, “Not now.”