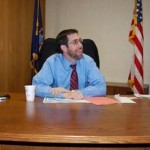 State Senator Daniel Squadron described his plans for design and financing of Brooklyn Bridge Park this evening at Borough Hall. He will host another meeting on the same subject on Sunday, April 5. With regard to design, he stressed that he does not want any housing built on Park land other than the existing 360 Furman Street condo conversion and the combined hotel/residential building slated to be adjacent to Pier One. Plans for use of Park land, he said, should include active year-round recreational facilities, including a “bubble” on at least one pier enclosing such uses as, for example, basketball and tennis courts, as well as a permanent on-shore or floating pool, and an ice rink that might also be usable as a roller skating rink in the warm months. He also said a water taxi dock is essential, and suggested that a proposed middle school could occupy part of 360 Furman. Although Squadron didn’t mention it, this would eliminate the need to put the school in the proposed Dock Street high rise building.

His plan for financing park construction and maintenance is to provide funds from additional property tax revenues generated as a result of rezoning of districts close to the Park. This would not, Squadron stressed, require any additional levy on property owners, such as with a Business Improvement District, nor would it entail any adjustment to property tax rates. It would simply require that a portion of the additional revenue generated as a result of increased assessments on properties that are improved or brought to code because of rezoning, and which are located within a designated distance from the Park’s boundary (Squadron proposes four tenths of a mile), be designated for funding the Park. Squadron said that his projections of the revenue this was likely to generate, which projections will be available on his website soon, were not dependent on the outcome of any specific rezoning proposal, such as that proposed for a portion of DUMBO and disapproved by Community Board 2’s Land Use Committee on
Wednesday. Nevertheless, it seems obvious that, for Squadron’s plan to succeed, there would have to be some form of up-zoning of the area affected by that proposal.

Squadron was asked what would be necessary to put his plan into effect. He said it would require action by both houses of the State Legislature and the Governor, and that he could not guarantee any timetable, though he said he would do all he could to expedite it. Strong community support, he said, was essential to its success. Asked whether his plan was contingent on either continued State control of the park or a City takeover, as proposed by the Bloomberg administration, he said no, although he noted that turning over the Park to the City without the City’s commitment to a realistic plan for development and financing of the Park would be a grave mistake.