Apparently, Macy’s has finally realized that where there’s smoke, there’s fire. For much of the past year, Public Advocate Bill de Blasio and Brooklyn Heights state Sen. Daniel Squadron have been rallying for the annual 4th of July fireworks extravaganza to return to the East River, including public rallies, petitions and a non-stop tirade of […]

State Senator Daniel Squadron is hosting a conference call tonight, inviting all constituents of the 25th District to call in and participate tonight at 5:30 p.m. On the agenda for the evening: Overview of topics from March’s Community Convention Buses, Subways, MTA Funding, and MTA Issues Pedestrian Safety, Street Changes, Bicycle Lanes, and Traffic Control […]

State Sen. Daniel Squadron will host a series of conference telephone calls beginning this Wednesday, September 23 at 5:30 P.M., and continuing for the succeeding three Wednesdays, September 30 and October 7 and 14, beginning at the same time, to discuss issues of interest to the community. These calls are a follow-up to his Community […]

State Senator Daniel Squadron has invited all constituents to participate in an open conference call this evening beginning at 6:00: Dear Friend, With all that’s happening in Albany, a lot of people have been asking me what’s going on and where I think we should go from here. In order to speak with you directly, […]

Squadron Sounds Off on Albany Chaos

State Senator Daniel Squadron today issued a letter by e-mail giving his views on the best way to resolve the present impasse following the now partially aborted coup of a week ago Monday. Squadron notes that the fundamental problem is that virtually all power, over both legislation and administrative matters, in the New York Senate […]

Thanks to the defection of two previously Democratic state senators, Pedro Espada of the Bronx and Hiram Monserrate of Queens, to the Republican side, it now appears, as reported by NPR, that the Republicans have regained control of the New York State Senate. This would put our State Senator, Daniel Squadron, in the minority, causing […] 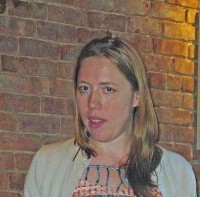 The Montague Street Business Improvement District (“BID”) held its annual meeting at Eamonn’s yesterday evening. BID Executive Director Chelsea Mauldin (photo at left) said the BID must respond to the economic crisis by providing more services to businesses on Montague in, among other things, marketing and technology. As an example of marketing assistance, she cited […]

A free ferry service from Fulton Ferry Landing, at the foot of Old Fulton Street, to Governors Island, will begin this Saturday, June 6, at 11:00 A.M. State Senator Daniel Squadron and other community leaders will be present for the inaugural ceremony. The ferry will run only on Saturdays when events are scheduled on Governor’s […]

State Senator Daniel Squadron described his plans for design and financing of Brooklyn Bridge Park this evening at Borough Hall. He will host another meeting on the same subject on Sunday, April 5. With regard to design, he stressed that he does not want any housing built on Park land other than the existing 360 […]

State Senator Daniel Squadron will host a “Community Convention” this Sunday afternoon, from 3:00 to 6:00, at Borough of Manhattan Community College, 199 Chambers Street. (Take the Manhattan bound 2 or 3 train to Chambers, then walk two blocks west, past Greenwich Street. BMCC will be on your right just before West Street.) In Sen. […]