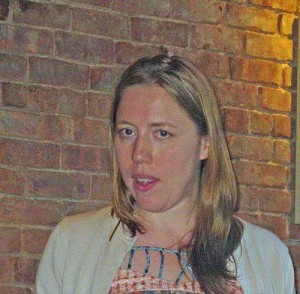 The Montague Street Business Improvement District (“BID”) held its annual meeting at Eamonn’s yesterday evening. BID Executive Director Chelsea Mauldin (photo at left) said the BID must respond to the economic crisis by providing more services to businesses on Montague in, among other things, marketing and technology. As an example of marketing assistance, she cited a program the BID developed with Pratt, in which design students have worked with one merchant on Montague to create a new image, including sign, logo and cards.

The BID will try to address the vacancy problem by promoting “pop-up stores” for which landlords will extend short-term leases either for a specific event–in this connection she mentioned master pumpkin carver and Heights resident Hugh McMahon, who would like to set up a temporary space before Halloween–or as a trial for a possible longer relationship. The BID will also seek to attract more visitors to Montague by repeating last summer’s “Pedestrian Piazza” experiment, which, Ms. Mauldin said, was successful in attracting more shoppers to the street, at least on sunny days, and also by promoting more cultural events that will get the street attention in the media. In this connection, she listed all of the newspapers, magazines and blogs (including BHB) that had coverage of the knitted cozies on Montague parking meters. She also mentioned plans for a “restaurant stroll.”

State Senator Daniel Squadron was the featured guest speaker at the meeting. He began by describing his own experience as a small business owner: before entering politics he ran a small bar and restaurant near the Columbia University campus that served “the best cheeseburger in New York” (he added that no one could challenge that statement because the place no longer exists). This had taught him the difficulties that small-scale entrepreneurs face in general, and in New York City in particular. He said he believes the state must establish policies to preserve and revitalize “urban retail corridors,” of which Montague Street is an example.

Judy Stanton, Executive Director of the Brooklyn Heights Association, asked him what the state is doing to help small businesses. Sen. Squadron said the State provides partial funding for some City programs that aid small businesses, as well as providing some direct grants. He also mentioned the Empire State Development Small Business Division. In addition, he said, there are continuing efforts to lift unnecessary regulatory burdens and restrictions on small businesses. For example, he said a new law is going into effect that will allow liquor stores to sell some non-alcoholic goods, such as tonic water and maraschino cherries. As an aside, he noted that one third of the maraschino cherries sold in the U.S. come from Red Hook. Tony Bates, owner of Bentley Shoes, complained of the difficulties he had dealing with State bureaucracy. Sen. Squadron said that anyone having such problems should contact Ellen Whelan-Wuest at his Brooklyn office, located in Borough Hall. The phone number is 718-802-3818.