Martin Connor’s 1990s’ Apartment Purchases: Too Good Of A Deal?

The Daily News reports NY State Senator Martin Connor bought two apartments for what appears to be less than their worth: one in 1994 for $12,500 and one in 1997 for $50,000: Connor, in a telephone interview, rejected Squadron’s allegations as “nonsense,” insisting he received no special treatment in the purchases. BPC, he insisted, only […]

This may be old news, but it was news to me: According to a 2006 Report compiled by the nonprofit Common Cause organization on NY State campaign funds misuse, State Senator Martin Connor spent over $70,000 on “other” expenses, including a brand new car (a Jeep Grand Cherokee) and a parking space in Brooklyn Heights, […]

Today LIVE at 4pm on The Homer Fink Show  — NYS Senator Martin Connor will be the guest.  The three decade incumbent representing the 25th District is facing what some are calling the fight of his career against upstart Daniel Squadron in the September 9 Democratic primary.  Regardless of the outcome of that election, Connor […]

No Nightlife for Martin Connor

Today’s New York Times discusses the declining nightlife of legislators in Albany. While “fun” has been going downhill for over a decade in the Capitol, the reign of Gov. Eliot “No Fun” Spitzer has accelerated its demise according to the report.  That’s inflicted Brooklyn Heights’ man in the State Senate, Martin Connor, with one heckuva […]

The Mayor’s Office today announced appointments to the governing board of the Brooklyn Bridge Park Corporation, a new entity established to plan for the future of the Park and to oversee construction and maintenance. Regina Myer, President of the Brooklyn Bridge Park Development Corporation, will serve as president of BBPC. The BBPC’s board consists of […] 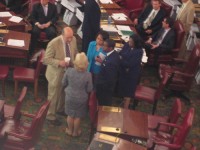 Our former man in the NYS Senate, Martin “Marty” Connor has been spotted on the senate floor according to the NY Daily News.   As the manchildren (and womenchildren) in that august body try to straighten up and act like adults, Marty was on the scene to lend some advice: NY Daily News: A short while […]

Marty Connor Is Gunning for Bloomie

The New York Daily News reports that former NYS Senator Martin “Marty” Connor (SD-25) is “poring over” Mayor Mike Bloomberg’s campaign finance report in an attempt to find something to “use against” him in this year’s election.  Marty tells the paper he hasn’t found anything… yet. NY Daily News: Connor has a big axe to […]

Sen. Martin Connor and Daniel Squadron, candidates in the September 9 Democratic primary in the race for the 25th State Senate District will debate on September 3. Citizens Union, publishers of the Gotham Gazette, will host the event from 7pm – 9pm at St. Francis College’s Founders Hall [180 Remsen Street]. Both candidates will be […]

The New York Observer’s Azi Paybarah shot this recent Democratic debate between NY State Senator Martin “Marty” Connor and Daniel “The Kid” Squadron. While Squadron seems to field questions in an open, friendly and transparent manner, Marty is… well… being Marty. Oh, and he supported congestion pricing, but didn’t tell anybody. Take the BHB NYS […]