Marty May Be Out of Office, But Don’t Tell His Jeep

BHB commenter Josh points to a story in the NY Daily News about former NY State Senator and Brooklyn Heights resident Marty Connor and other public officials who left office last year but cling to their past via  new vanity plates: NY Daily News: Politicians Not in Office…: Longtime State Sen. Marty Connor lost his […] 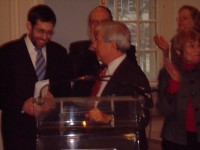 BHB Photo by Diana Rosenthal   This afternoon, Senator Daniel Squadron announced that he is opening a Brooklyn District Office that, thanks to the generosity of Borough President Marty Markowitz, will temporarily be in Borough Hall. Squadron also announced the appointment of Ellen Whelan-Wuest as his Brooklyn Office Director, whose first task will be to […] 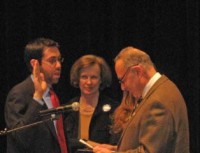 U.S. Senator Chuck Schumer administered the oath of office to NYS Senator Daniel Squadron (D-SD25) in two local ceremonies on Sunday (1/25) in Brooklyn Heights and Lower Manhattan.  Squadron has vowed to be “accessible” to constituents throughout the 25th State Senate district.

New York Magazine profiles our man in the NYS Senate Daniel Squadron this week.  And even before the paint is dry in The Kid’s Albany office, a commenter takes a swipe at him:

As the hangovers subside and people gradually get used to the fact that the last eight years of horrendous governance will be coming to an end shortly, I thought I would share with the BHB community my experience voting during this historic election. At some point during the day I commented on BHB that there […]

Sen. Squadron and the Tomb of Old Republicans

It’s morning in Albany.   A chilly, crisp January morning in a city even more dreary than William Kennedy could ever possibly describe in his many novels about this cesspool of a capital city. There’s a reason why they say the best thing about Albany is its equal proximity to Boston and New York City. […]

Discuss the results of all the political battles here.

The readers of Brooklyn Heights Blog have overwhelmingly endorsed Democrats Daniel Squadron for NY State Senate and Barack Obama for President. In a poll conducted this week,  60% of poll respondents who live in the 25th NYS Senate District endorsed Daniel Squadron over his Republican opponent John Chromczak who received 8.6% of the vote.  A […]

For those of you who couldn’t make it out to BHB’s NYS SD 25 debate aka The Great Debate: Squadron vs. Chromczak on Tuesday night, you can view it in its entirety after the jump.