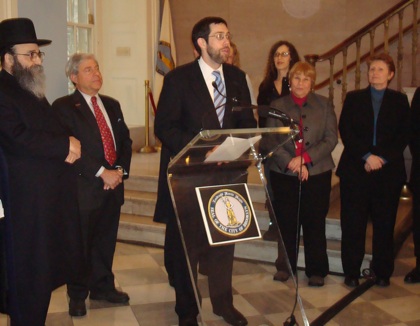 This afternoon, Senator Daniel Squadron announced that he is opening a Brooklyn District Office that, thanks to the generosity of Borough President Marty Markowitz, will temporarily be in Borough Hall. Squadron also announced the appointment of Ellen Whelan-Wuest as his Brooklyn Office Director, whose first task will be to find space for a permanent office in the heart of the district. Though not a native of Brooklyn, Whelan-Wuest now resides in Carroll Gardens (as does Squadron), and was urged by both Squadron and Markowitz to eat at Junior’s as soon as she gets a chance.

By opening his office in Brooklyn, Squadron said he is “making good on [his] promise to represent every part” of the 25th Senate District – from downtown Brooklyn to lower Manhattan.