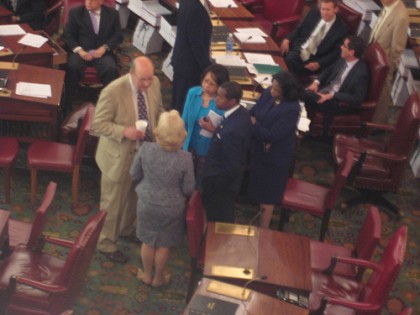 Our former man in the NYS Senate, Martin “Marty” Connor has been spotted on the senate floor according to the NY Daily News.   As the manchildren (and womenchildren) in that august body try to straighten up and act like adults, Marty was on the scene to lend some advice:

NY Daily News: A short while ago, there was a little confab in the middle of the chamber floor between Shelly Mayer, counsel to the Senate Democrats, Sen. Malcolm Smith and former Minority Leader Marty Connor (he’s the one in the tan suit, if you don’t recognize him).

There’s something really ironic about the fact that one deposed minority leader (recall that Connor was ousted in a 2002 coup by none other than David Paterson himself) advising an all-but deposed majority leader (Smith) on how to hold on to power.

Thanks to “bornhere” for the link