Brooklyn Heights Association Executive Director Peter Bray said the cold weather made him hope that 300 people would show up for yesterday’s rally on and for the Promenade, but by our estimate there was well more than that number. (Update: the New York Post estimates the turnout as “[a]bout 200″; we believe this is way on the low side. The Eagle gives an estimate of “several hundred”; scroll down in the linked story to the photo taken from above, which shows only part of the crowd.) People kept arriving well after the announced starting time of 11:00 A.M.

Mr. Bray began by announcing the BHA’s opposition to the City Department of Transportation’s preferred alternative of building a temporary six lane highway that would replace the Brooklyn Heights Promenade for a period of at least six years while reconstruction of the cantilevered portion of the Brooklyn Queens Expressway below proceeds. Mayor De Blasio has expressed his support for this plan, but according to City Council Member Stephen Levin later partially walked back that statement by saying he considers an alternative plan proposed by the BHA, to run the temporary highway over the berms on the east edge of Brooklyn Bridge Park, to be “worth exploring.” 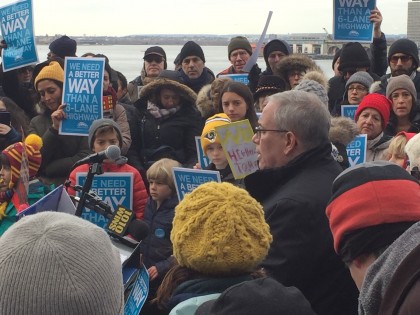 The first elected official to speak was City Comptroller Scott Stringer, who in December sent a letter to the Mayor and to DOT Commissioner Polly Trottenberg, faulting them for not consulting with affected communities and not considering alternative plans. He said the DOT plan fails to consider evolving trends in transportation, instead perpetuating a 1950s Robert Moses solution. He compared it to “buying the drapes before you buy the house.” 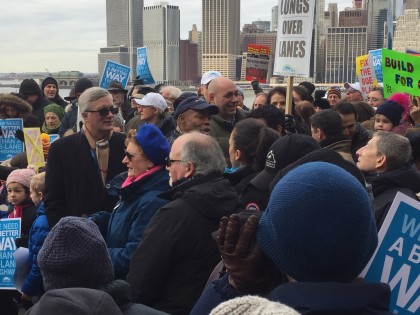 Among the elected officials present were State Senator Brian Kavanagh (in photo above, with sunglasses) and Assembly Member Jo Anne Simon (in blue cap, next to Kavanagh). In her remarks, Ms. Simon took the state to task for having taken money appropriated for a study of the BQE rehabilitation and re-allocated it to the Tappan Zee (now Governor Mario M. Cuomo) Bridge. She was loudly heckled when she would not unequivocally state her opposition to the DOT proposal. Ms. Simon has invited all to have “Java with Jo Anne” and discuss any community concerns with her this Thursday morning, January 17, from 8:30 to 10:30, at One Girl Cookies, 33 Main Street (between Plymouth and Water) in DUMBO.

Brooklyn Borough President Eric Adams (photo above, in baseball cap) received ethusiastic applause and cheers when he decalred, “I am an environmentalist” and stated his opposition to the DOT proposal. Representatives from the offices of Mr. Levin, and of Congresswoman Nydia Velazquez were present and spoke.

One elected official whose district does not include any part of Brooklyn Heights or nearby neighborhoods spoke in opposition to the DOT proposal. This was State Assembly Member Latrice Walker, whose district includes parts of Brownsville, where Ms. Walker grew up and still lives, and Stuyvesant Heights. She recalled childhood memories of visiting the Promenade, and said that, as an asthma victim, she opposed any plan likely to worsen air pollution.

Several representatives of local community groups also spoke. Hillary Jager, speaking for A Better Way NYC, said the group not only opposes the DOT plan, but also any plan that would add congestion to local streets. Toba Potosky, Board President of Cadman Towers, Inc., expressed strong opposition to the DOT proposal on environmental grounds.