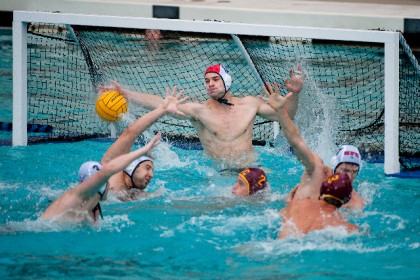 As the result of a dramatic 6-5 victory

Waiting for the Terriers (23-10) in a Final Four semifinal tomorrow at 4 p.m. EST in Stanford’s Avery Aquatic Center are the top-seeded Trojans (26-4) of USC, who are looking to extend their record string of NCAA titles to six.

The Terriers and Trojans know each other well. In a 2010 NCAA semi-final match, unheralded St. Francis pushed favored USC to the limit, dropping a 10-7 decision to the eventual NCAA champions. The Terriers performance three years ago not only identified St. Francis as one of the East’s top water polo programs, but was also a coming out party for goalie Igor Mladenovic. A freshman in his first NCAA championship, Mladenovic stopped 17 Trojan shots as the Terriers made a bid to become the first eastern team to advance to a championship final.

Mladenovic is now a senior, but the party has not yet ended for him: he’s still at his best just when his team needs it most.

In yesterday’s match Mladenovic made 10 saves including two first-half penalty shots that St. Francis Head Coach Srdjan Mihaljevic, described as “demoralizing” for the Tritons of UCSD. Terrier freshman phenom Ilija Djuretic contributed a hat trick as the Terriers rallied from an early 2-0 deficit.

With their eighth straight win, it’s apparent that Mihaljevic has St. Francis peaking at just the right moment. According to Ed Hass, Director of Communications for the Collegiate Water Polo Association (CWPA), Eastern water polo’s governing body, the Terriers “have a puncher’s chance against the Trojans” because of their All-American goalie and because they play well in big spots.

“St. Francis-vs-USC will be closer than people think,” said Haas, who has been at the CWPA since 2006. “Both teams are extremely talented, and St. Francis has a history of playing up to the level of their competition in championship events.”

USC Head Coach Jovan Vavic, whose men’s and women’s teams have more NCAA titles (12) than he has fingers, was complimentary when asked about his upcoming opponent. “Big win today vs. UCSD,” said Vavic. “We are looking forward to a tough match. SFC has one of the best goalies in the country and I have lots of respect for their WP [water polo] program.”

For goalie Mladenovic, now is the time to end his collegiate career with a memorable performance.

“We owe USC a victory from 2010,” said Mladenovic, appearing in an NCAA championship for the third time in his SFC career and second year in a row. “They are the strongest team in the country… [but] we want to surprise them on Saturday.”

Then, with a line that every Terrier fan wants to believe, Mladenovic added that “everything is possible in the Final Four.”