The Bid for the 25th Goes Down Today 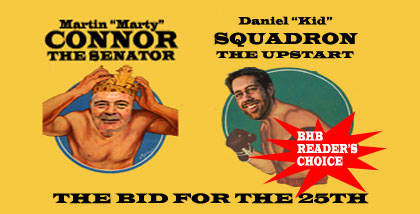 Last week, we announced that BHB Readers have endorsed Squadron in this race.

Some folks on the BHA’s mailing list report receiving an email from the Brooklyn Bridge Park Development Corporation’s Joanne Witty supporting Connor today (Update: The BHA emailed us to say that they never share their contact information).  The incumbent squeaked by in the 2006 primary against Ken Diamondstone by less than 2000 votes.  Text of Witty’s email after the jump.

You probably know a lot about the State Senate primary race between Marty Connor and Daniel Squadron, but there are two things you may not know.

First, there was a debate last week at St. Francis sponsored by Citizens Union, a non-partisan advocate for reform in Albany. After interviewing both candidates and listening to the debate, Citizens Union announced that it preferred Marty Connor in this race. They said that “Connor, because of his knowledge and length of service, would undeniably be in a stronger and more experienced position to effectively advance critical reforms than his challenger.” The complete statement, which has a lot more detail about both candidates, can be found by clicking here.

Second, you should know how important your vote is. In the last election, the margin of victory was about 2,000 votes. The turn-out this year may be lower since there are few other important races in this Senate District. That means every vote is important, really important: a few hundred votes or even a few dozen could be the margin of victory this time.

There’s one other fact you probably know already: Connor has been a supporter of Brooklyn Bridge Park now under construction, and his challenger is not.

Please vote tomorrow, even if it rains! It could really make a difference.