Hate is on our doorstep, where our children play. On Friday afternoon a resident alerted Senator Daniel Squadron’s office that Adam Yauch Park playground had been defaced with swastikas and the message, “Go Trump.”  The Daily News reports The NYPD Hate Crimes Task Force is investigating the incident and the Parks Department is in the process of removing the offensive graffiti. 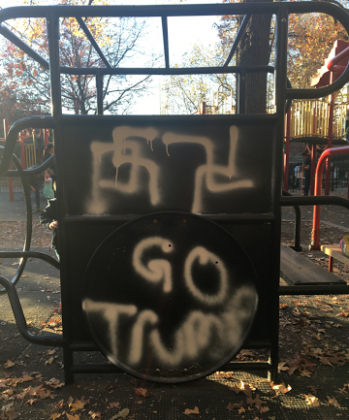 In response, elected officials and community leaders immediately organized an event for this Sunday to “Stand Up Against Hate.”

The gathering  is scheduled for this Sunday at 11:30 am at Adam Yauch Park, located on State Street between Columbia and Willow Place.

Numerous music industry publications have reported the incident including Billboard and Pitchfork. Adam Yauch, a.k.a MCA was a founding member of the seminal hip-hop group, The Beastie Boys.  Like his two surviving band mates, Adam Horovitz (Ad-Rock) and Michael Diamond (Mike D), Yauch was Jewish.  The park was posthumously renamed in Yauch’s honor in 2013 after his death from cancer in May 2012. Horovitz is scheduled to attend.

Officials announced the event via social media.  In one of several tweets, Daniel Squadron invited the President-Elect. 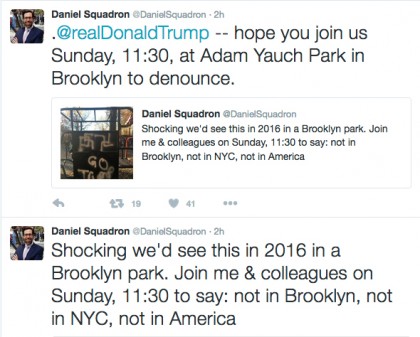 Councilmember Brad Lander released a statement via his Facebook page, “Yet more hatred and anti-Semitism from Trump supporters. Swastikas on the playground equipment in Adam Yauch Park in Brooklyn Heights.

Adam Yauch is weeping for our country. His mom was Jewish. He was a practicing Buddhist. He spoke out against Islamophobia. And though some of the Beastie Boys early lyrics were homophobic and misogynist, they later apologized, in an open-heared and earnest way. “I want to say a little something that’s long overdue/The disrespect to women has got to be through.”