Sifton Reminisces About Pizzas Past, Looks to Future at BHA Meeting

New York Times National Editor Sam Sifton recalled a rough-and-tumble childhood growing up on Willow Street, learning tricks like heading down Grace Court, which would trick pursuers seeking to “yoke” him into thinking he would be trapped on a dead-end street, then going over the fence and walking above the BQE to safety on Remsen Street. As the Times’ former restaurant critic, he also had memories of Heights food establishments, especially the old Queen Pizzaria on Court Street and Fascati’s, which he said was for him the defining slice. Other places he remembered fondly were China Chili (a favorite of your correspondent when he first moved to the Heights in the mid 1980s), the Promenade Restaurant, Mr. Souvlaki (“no place like it in the world” Sifton thought at age ten) and Capulets, where he said most of his St. Ann’s teachers could be found from about three in the afternoon until midnight.

He said he thought Brooklyn’s entry into the world of haute cuisine began with the opening of Patois on Smith Street, at a time when it was still a decidedly seedy area. This led to the proliferation of fine restaurants there. He sees the same thing happening in other places in the Borough. Asked where he thinks the next Smith Street will be, he said that rents will tell the story. Opening a restaurant is a particularly risky proposition, so reasonable rent is a very important consideration. This would seem to rule out Montague Street, though one audience member pointed out that what she believed would be a first class Spanish restaurant will be opening on Montague between Clinton and Henry.

Asked what he liked least about being a restaurant critic, he said it was the assigning of stars as ratings. “It’s my St. Ann’s background; what are these grades?” Asked why he had given up the position, he said that becoming National Editor at the beginning of an election year was just too exciting a prospect to turn down. 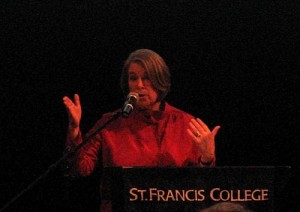 At the meeting’s opening, BHA President Jane McGroarty began by reviewing the past year, noting such accomplishments as the addition of a middle school to P.S. 8, the designation of the Borough Hall Skyscraper Historic District, getting improved pedestrian access at the Atlantic Avenue entrance to Brooklyn Bridge Park, and winning the court cases that preserved the Tobacco Warehouse as parkland. She noted that the effort to get residential parking permits was likely to be a long one. Channel 13 personality and Remsen Street resident Tom Stewart gave community service awards to SUNY Downstate at LICH and to Deputy Inspector Mark DiPaolo, Commander of the 84th Precinct. He also presented awards for restoration excellence to Amy Klein and Jeremy Lechtzin, owners of 58 Hicks Street, and to 177 Columbia Corp., owner of 177-179 Columbia Heights. He also amused the audience with questions about Downton Abbey.

At the discussion at the end of the meeting, there were many questions about traffic issues, including cars running the stop signs at the foot of Montague Street, bicyclists riding on sidewalks and otherwise violating traffic rules, and the possible imposition of a 20 mile per hour speed limit in the Heights. D.I. DiPaolo said that getting cameras to record violations is subject to state approval, but that he would alert his officers to look for violations at the places noted. He said police were being pro-active in trying to educate cyclists about traffic rules, as well as merchants who use bycyclists for deliveries. Ms. McGroarty said that there may be ways to calm traffic at the foot of Montague other than the installation of a camera. Asked about the derelict building at the corner of Clark Street and Monroe Place, she said it has been sold to someone who intends to build a five story building on the site.