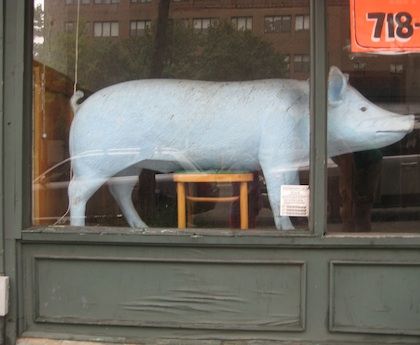 BHB reader “Jason” sends in this photo, taken by his daughter “Zoey”, of a blue pig in the window of 87 Atlantic Avenue former home of Dallas Jones BBQ. Is this the same mascot from the ill-fated Blue Pig Ice Cream store of Busted Chef fame?

Well we do know that the “real” Blue Pig suffered an injury to its right ear.

However, he may have been repaired. What do you think? Why is he there? And aren’t you glad this isn’t a post about Irene?
Share this Story: