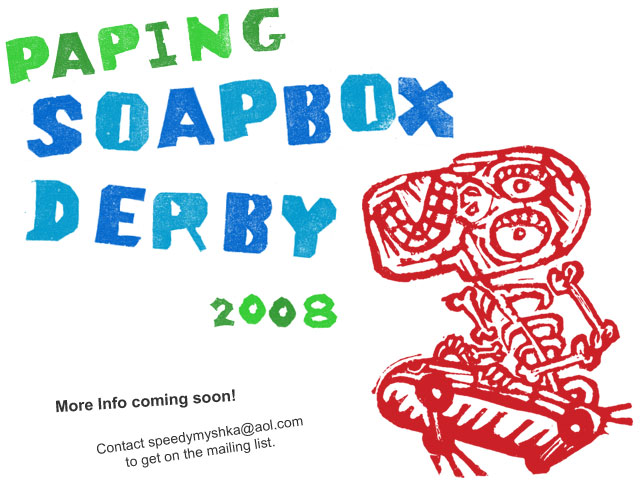 The Paping Soapbox Derby, which was scheduled for August 23 here in Brooklyn Heights has been killed.  A cryptic email sent out by organizer John Meijas arrived in the BHB Inbox late last night:

The Paping soapbox derby is no longer with us. Who killed it? The Brooklyn Paper? Jehovah? The city of NYC  film permits department? No, it was me, John Mejias for trying to make good things in this world legit when they should be kept underground.  No one is more sad than I. Sorry and thanks to everyone.   -John Mejias

The event started five years ago on the steep Columbia Heights slope known as “Suicide Hill”.  Last year, after objections by the Watchtower Bible and Tract Society, the race moved to Fort Tryon Park in Manhattan.  Meijas secured a permit to bring this year’s race back to Brooklyn.  Under the auspices of a film permit for a documentary about “kinetic sculpture” the race was set to go later this month.
BHB has offered Meijas a chance to tell his full story here or on an upcoming edition of The Homer Fink Show.  The BHB Racing Team was busy working on its entry in the derby with driver Dan “Finemente” Fine at the helm.

Meijas’ appearance on The Homer Fink Show
Share this Story: