The Cheops Award: Cast Your Vote 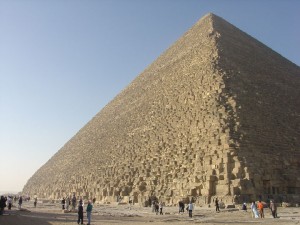 No one today knows how long it took to build the Great Pyramid of Cheops, though it has been estimated to have been at least thirty years. My earlier post on the persistence of scaffolding, and the number of long-term construction or renovation projects underway in the Heights, brought Cheops to mind. So, I’ve decided to ask our readers to say which project they think deserves the Cheops Award for mind-boggling protraction. To see some candidates, as well as my personal favorite, read on.

First, there’s one obvious candidate I’m taking out of the running. That’s the exterior renovation of St. Ann & the Holy Trinity Church. This project has already put Cheops to shame. It was underway when I moved here in 1983, and has been on hiatus for about the last decade. It’s in a league of its own, perhaps Chartres Cathedral, which took 66 years to build, defines its class. Some that deserve consideration include the plaza reconstruction at 75 Henry, and the exterior renovation at 65 Montague/ 20 Pierrepont. A promising dark horse is 82 Remsen, and the partially collapsed 100 Clark is an intriguing prospect. 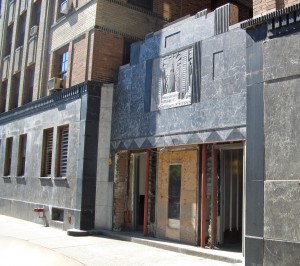 My personal favorite, though, is 80 Cranberry (see photo at left). Although the major exterior work on this magnificent art deco building was completed, and the scaffolding removed, some months ago, its once splendid doorway remains a skeleton sheathed in plywood. I can remember this doorway in its original state, and how chunks were allowed to fall off the fluted black columns flanking the main entrance, making me wonder if the building’s owners were striving to create a “picturesque ruin” effect.