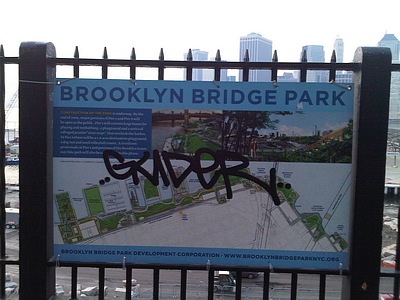 This in from Judy Stanton, Executive Director of the Brooklyn Heights Association:

The 84th Precinct captain just stopped by to tell me that the graffiti taggers using Rex and Guder, whose tags were found on public and private property all over the north Heights, have been arrested. Credit goes to the arresting officer, Freddy Ahmetaj, and the taggers, who were caught on camera, will be charged with multiple counts of graffiti.

Unfortunately, “Guder” was able to tag one of the useful Brooklyn Bridge Park maps posted on the Promenade (the one near Clark Street) before being caught (see photo above).