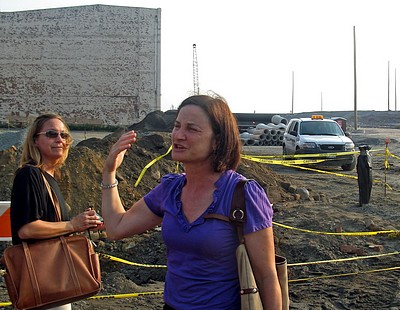 Yesterday evening, your correspondent joined a group of thirty or so people, including BHB contributor Matthew Parker and Brooklyn Heights Association Board of Governors member Martin Schneider, for a tour of the northern portion (Piers 1 and 2) of the construction site for Brooklyn Bridge Park. Brooklyn Bridge Park Development Corporation President Regina Myer (photo above) greeted us, after which we split into two smaller groups for the tour. More photos and text follow the jump. 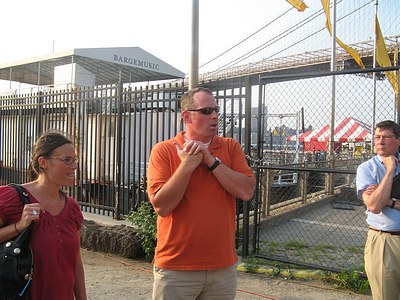 Steve Noone, a senior associate at Michael Van Valkenburgh Associates, Inc., Landscape Architects, the prime contractor for the park project, was the guide for my group. 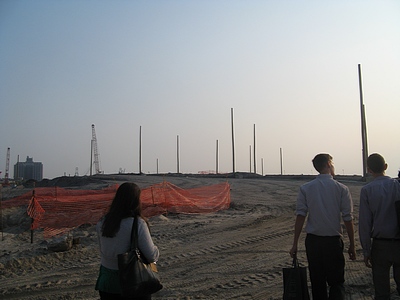 Following Steve, we walked southward up the hill that has been deposited on Pier 1, made of material excavated in the construction of the LIRR “Midtown Connector” tunnel. The southern portion of Pier 1 can bear the weight of this fill, because it is itself built on landfill instead of on pilings. The tall poles will support lights. 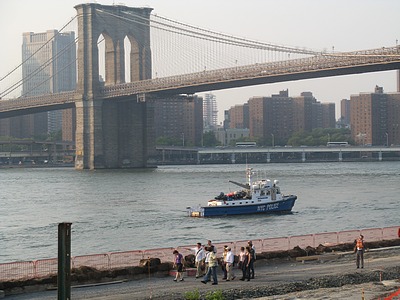 Above is a view from near the summit of the hill, which is 27′ above the level of the pier deck. The other group is passing on what will become a riverside esplanade. 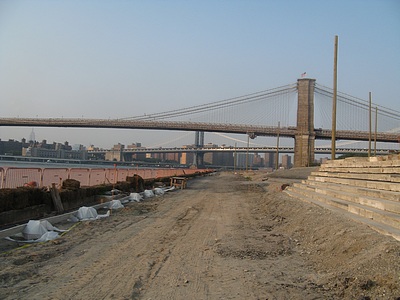 Looking southward along the soon-to-be esplanade, the “River Stairs” leading up the hill are to the right. These are made from stone removed from one of the Harlem River bridges during its reconstruction. 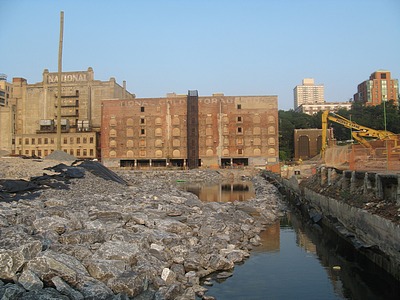 We’re looking eastward now, along what in a previous post I called the “Grand Canyon”. The cold storage warehouse buildings in the background are soon to be demolished. The older parts of the building complex contain timbers from a now-extinct species of Southern longleaf pine, a portion of which will be used for park benches. The plan is for these buildings to be replaced by a hotel and residential complex. The building that will replace the one on the right in the photo will be considerably lower than the existing one, and will thereby open up a larger view plane from the Brooklyn Heights Promenade. There will also be a gap between that building and the new center building (the center is the tall one with “National” on the top, which is planned to be replaced by a slightly lower building) which will afford a clear view of the River from Squibb Park.

The wall at the right of the photo above marks the southern boundary of the newer portion of Pier 1, which, as noted above, sits on landfill. To the right is the older, northern portion, which sits on pilings. The deck is to be removed, leaving the pilings to provide a habitat for marine life and as a kind of picturesque ruin, rather like the plan for Pier 4 (the small wooden former railroad pier near the foot of Montague Street), which is to leave it as is. Steve pointed out that the exposed pilings will “express” the routes of the tunnels for the 2 and 3 trains, because there will be gaps between the pilings along the tunnel routes. 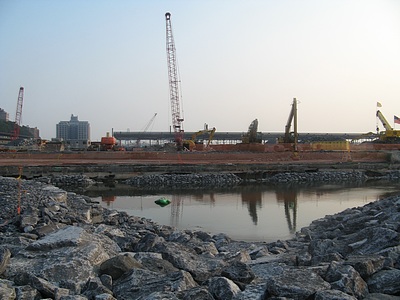 Walking eastward by the “Grand Canyon”, we came to a broad patch of water that is slated to become a salt marsh. It will be planted with spartina, a marsh grass common on the Northeastern coast (and also a damn good novel). 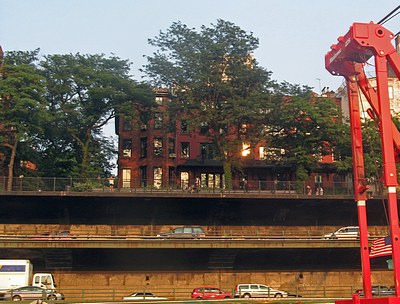 Here’s a view of the Promenade and BQE from a fresh perspective. 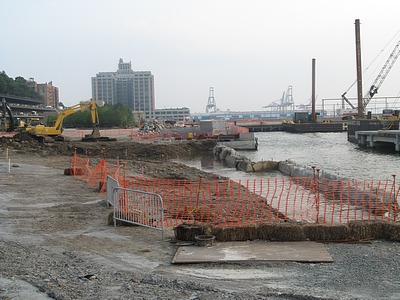 Kayaks and rowboats will be able to use the “safe water” canal that has been opened between Pier 2 and the shore, at the right in the photo above, and which will be continued next to Pier 3. (In response to a question raised by reader Andrew Porter in the comments to my previous Park Progress post, Steve confirmed that there will be safety barriers to prevent boats from straying under the pier structures.) The body of water extending to the left in the photo is a “spiral pool” that will provide a means of entrance to and exit from the canal for kayaks and small boats.

The String Orchestra of Brooklyn
If Murdoch Says He’ll Charge for Online Content, Does That Mean the Brooklyn Paper Too?