Five Books About Brooklyn Heights You Should Be Reading Right Now

Anyone who loves Brooklyn Heights and wants to know more about its history, should consider these five books as a quick primer on the neighborhood. Long time residents/readers of BHB may already be familiar with these titles – at least two are written by friends of the site – and are welcome to share their […]

Heights History: A Look Into The Past Of Some Montague Street Restaurants

We recently went on a trip back in time at some of the restaurants in the North Heights. Now it’s time to start doing the same down on Montague Street. What was there before today’s eateries? What do the owners want you to order if you stop by? Let’s find out! Our first stop will […]

Way back in 2012, the New York State Lottery filmed a commercial in and around Brooklyn Heights. It featured zombies…lots of zombies. By mid-afternoon, the storyboard had evolved to a crowd of zombies collected around the shiny new newspaper vendor site in front of City Chemist at 129 Montague (with a car now completely overturned), […]

Here’s the latest in our revisiting of our Heights History series – this post originally ran on March 24, 2009.

NYC history geeks like your humble publisher always enjoyed a class trip to the Museum of the City Of New York. It has an awesomely awkward name and the exhibits and photos of olde New York took us to a world gone by. This week, the museum’s website shines a spotlight on Brooklyn Heights. Check […]

From Karl Junkersfeld this note about his latest BHB video: One of the wonderful things about living in Brooklyn Heights is its rich history. Henry Ward Beecher and Plymouth Church are near the top of the list as far as historical significance. According to many Henry Ward Beecher was, next to Lincoln, the most famous […]

Can You Guess Where These Vintage Brooklyn Heights Area Photos Were Taken?

Karl Junkersfeld’s latest short film pulls photos from Brooklyn Heights’ past and show us what those locations look like today. Before he gives you the big reveal on each, how many do you think you know?

Watch the video after the jump.

On May 26, 1972 the New York Times wrote about a clash between residents of Brooklyn Heights that “threatend” the “serentiy and harmony” of the neighborhood. The bone of contention – the use of “pooper scoopers” by dog owners. The newspaper reported that about 80 “vociferously pro-dog” residents gathered at the War Memorial in Cadman […]

On November 21, 1982, the New York Times published If You’re Thinking of Living in Brooklyn Heights outling the benefits of living here in the nabe. 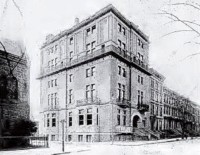 The well-heeled Gloucester family, who lived and worked in Brooklyn during the second half of the 19th Century, is intimately profiled on Brownstoner. The Rev. James and his wife Elizabeth, for one, operated a successful upscale boarding house on the corner of Remsen and Clinton Streets in Brooklyn Heights, known as Remsen House (and subsequently […]