NBC’s crime drama, “The Mysteries of Laura”, shot on Cranberry, Henry and Orange Streets Friday night (11/7). We caught their support vehicles preparing to take over Henry Street around 5:30pm. By 8:30, traffic was rolling down Cranberry Street while the production shot in front of number 80. FX’s “The Americans”starring neighborhood resident Keri Russell, shoots […] 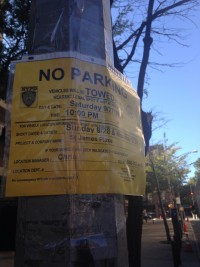 Forget what the signs say–the production that is taking over the neighborhood for days on end has decided that 24 hours of empty streets isn’t enough. By 9 am, production crews had set up cones to prevent parking on multiple blocks. Calls to the number listed on the sign yielded only voicemail; a call to […]

Photos: HBO’s Boardwalk Empire Shoots on Monroe Place and Turns Back the Clock to 1931

HBO’s Boardwalk Empire filmed on Monroe Place today and will be filming in the vicinity at least through Monday. This is the final season of the drama starring Brooklyn’s own Steve Buscemi and early reports say that no character is safe.

Check out our photos and a SPOILER (sorta) after the jump.

As we tweeted last week, signs were posted around Cranberry and Hicks Streets asking cars to be moved by 5pm Sunday (12/15) or risk being towed to make way for filming of The Cobbler. The Adam Sandler flick was in the same area a couple of weeks ago. Signs were still up this weekend, even […]

Today’s TV Shoot Of ‘Hostages’ Is A No Tow Situation

Signs were posted over the weekend around Monroe Place and Pierrepont Street informing residents that the CBS drama ‘Hostages’ would be filming in the area today. The BHA’s Judy Stanton tells us that the towing permit for the shoot was denied by the mayor’s office yesterday. The production company has changed the signs to reflect […]

If your car is parked on Henry Street or Hicks around Pineapple and Clark Streets, make sure you move it before 10pm Saturday (6/8). ‘The Normal Heart’ a new HBO movie starring Mark Ruffalo and Jim Parsons (Sheldon from ‘Big Bang Theory’) will be shooting there on Sunday. (If your car does end up towed, […]

The Carrie Diaries, the CW’s “pre-quel” to the seminal HBO series Sex in the City is filming all over Brooklyn Heights today – most notably the area around Clark and Hicks Street. If you see any exciting action tweet us your pics – @bkheightsblog. We’re especially jazzed about this show at BHB since Fink family […]

As noted here, our man in the NYC Council, Steve Levin, would like to see filming in Brooklyn Heights take a chill pill and be still for a while. This dispatch from a BHB contributor shows that filming in the neighborhood can be more that just a small inconvenience. NBC’s shoot Monday for the show […]

Signs are up around Montague Street alerting motorists to move their cars before 10PM Monday night (10/4). NBC’s hit drama Smash will be filming. The show stars Debra Messing, Katharine McPhee and Anjelica Houston.