Several days ago, your correspondent spotted this huge tractor-trailer rig trying unsuccessfully to turn from Montague to Hicks Street. Its way was blocked by a smaller bread delivery truck parked on the west (left) side of Hicks, close to the intersection. I didn’t stay around to see how this finally was resolved (I had to make it to my day job), but I suspect it was when the bread truck driver, having finished his delivery, showed up and moved. 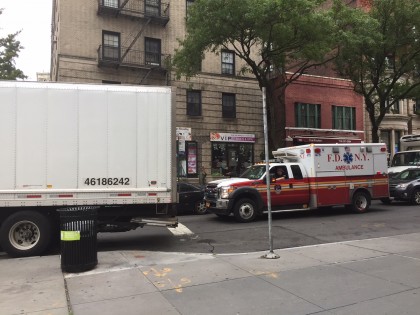 Behind the big rig was an FDNY ambulance; fortunately not on an emergency mission, as its siren was silent, as were the horns of the cars stopped behind it.

Earlier the same day, a similar eighteen wheeler tried to make a left from Montague to Pierrepont Place (perhaps because the same bread truck was blocking the turn to Hicks) and struck a tree on the west side of Pierrepont Place.