Glass Artist Tags Brooklyn Heights (and Beyond) With Colorful Pigeons

About two weeks ago, I made the most delightful discovery at the intersection of Henry and Orange Streets: A glass mosaic pigeon affixed to the base of a street lamp. It instantly made me smile and reminisce about how, as a teen, I would frequently spot similar treasures in downtown Manhattan; the jubilant dancing babies of Keith Haring, golden crowns of Jean-Michel Basquiat and prophetic wheat paste “Truisms” of Jenny Holzer. I would later go on to study these artists, now all of them icons, in college. 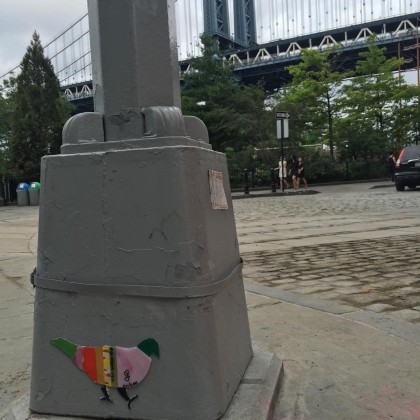 Corner of Water and Main, Dumbo. Photo courtesy of gb_pigeon_nyc.

This plucky bird before me tapped into the rich history of NYC street art, one that now includes the work of Swoon and Shepard Fairey. And, here it was, at my literal doorstep and serendipitously across the street from the former and beloved Brooklyn Heights Cinema where I once enjoyed the Banksy documentary, “Exit Through the Gift Shop.” (Last year, the notorious British stencil artist visited NYC and tagged the Promenade.  Alas, it was promptly scrubbed by the Parks department.) “Giftshop” introduced me to the work of Space Invader (whose 8-bit tile mosaics I have had the pleasure to spot in Paris-and the approach to the Holland Tunnel of all places) and his eccentric cousin, shop keeper and amateur videographer turned street artist, Mr. Brainwash.

So WHO left this little gem at my feet? I leaned in for a closer look and spied an edition number (the Henry Street bird is 26 out of 200) and an Instagram handle, @gb_pigeon_nyc. I thought, “200? Now THAT’s dedication!” It spoke volumes to me about the tenacity of human creativity and the art-making process itself. A private Instagram message and one week later, I found myself sitting across from the artist at the Starbucks in Dumbo. 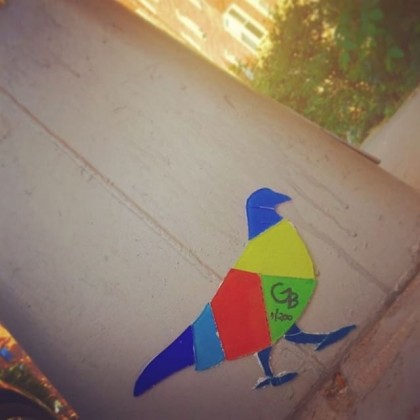 The artist, whom I’ll refer to as GB, agreed to be interviewed under the condition of anonymity.  First, because the birds are a personal side project.  Second because, you know, gluing glass pigeons to street lamps is technically vandalism.  GB is a native New Yorker, has a “day job” as a teacher but also creates commissioned stained glass works.   When asked how the pigeon project came about he explained, “I was preparing for the Artist and Fleas market in Williamsburg.” In speaking to other vendors, GB was advised to “definitely make New York stuff.”  However, making art for tourists ultimately fell flat.  “Everything I was making had nothing to do with the artistic process…it was making me almost annoyed…I became caught up in selling it.”

The birds are hand-cut from remnants left over from commissioned pieces. Each one takes about 20 minutes to assemble.  So far 65 out of the 200 have been fabricated and 54 have been mounted throughout parts of Brooklyn, Manhattan and even in Costa Rica. There’s no master plan for the pigeon placement. But, to me as a life-long New Yorker, almost every location chosen holds some significance. 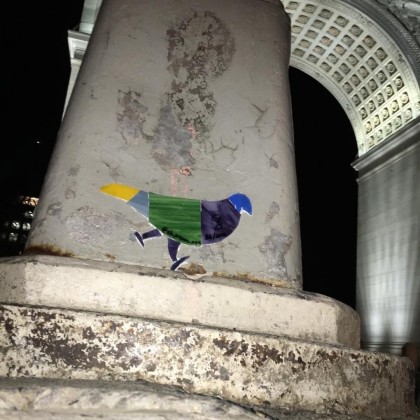 Henry Street was selected for its proximity to Sociale. Francesco, the owner is a close friend and he picked the mosaic he liked best.  GB is also a long-time regular of Gleason’s gym, so Dumbo is near and dear as well.  (Alas, the Dumbo birds have since been removed but can be seen on Instagram). A special red, white and blue pigeon commemorating Independence Day is being held in reserve for just the right spot (“perhaps near the Empire State Building or the World Trade Center”) so it photographs well, and will likely be installed over Labor Day.  But the best part for GB is that many friends are clamoring to go on pigeon posting missions.  They join GB for dinner, walk the neighborhoods and select a location together.

The goal is to mount all of the birds by September 21st, the official end of summer.  GB will see what happens after 200 are done. Perhaps they will change the design. Perhaps not. In the meantime GB reflects on the project, “It’s turned into the best summer I can remember in a long time.”

Call me a luddite, but who needs Pokemon Go when you can embark on a quest for pigeons? Follow on Instagram and create your own scavenger hunt.