As previously reported, over the weekend someone posted a giant banner facing the Brooklyn Heights Promenade asking someone name Katrina to marry him.

Well, this morning via the BHB inbox that mystery was solved.

As for the future bride, she’s Katrina Eugenia a professional photographer who has been published in Black Book Magazine, Inked Magazine among others. She’s a model who has posed for magazines including Playboy and Esquire. 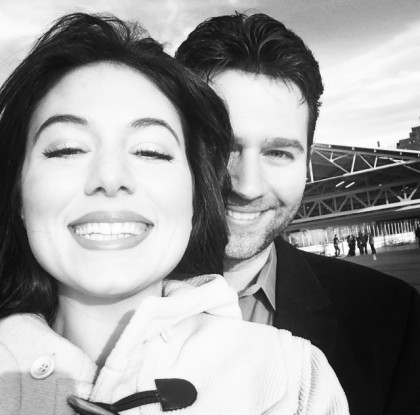 Here’s her dispatch to BHB:

My now fiance just sent me a link to this adorable and hilarious piece, and I am delighted to know that others noticed his brilliant hard work, and ever so sweet, proposal!

I was tickled pink – as pink as the banner!

We took a stroll to the end of the pier, and at the edge of the East River, he turned me around to read the twenty foot, satin banner, that he made himself, with the help of my best friend, Julie Mollo. At once I laughed and cried as I read it, and turned around to find my Buffalo on his knee, proposing with the sweetest words I have ever heard.

We strolled down to the River Cafe for a magnificent dinner, and all the while, we were floating on a cloud. We had so much fun!

I am Katrina, and I am filled with joy and gratitude to be able to tell you that SHE SAID YES!!! Katrina Eugenia and John Buffalo Mailer are engaged!