One person’s trash is another person’s treasure, or so the adage goes. It started with a late-afternoon post to Buy Nothing Brooklyn Heights/Dumbo/Vinegar Hill. St. Ann’s School had just dumped hundreds of books in the trash. “Curb Alert: Close to 40 Clinton by the parking garage at 3:50pm Tuesday…Hundreds of books. So many good ones.” The post fomented outrage and garnered 66 comments at last count. 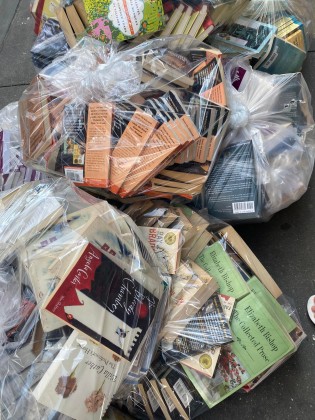 As Brooklyn Heights residents began to return from work several stopped to forage through upwards of eight or more clear plastic bags filled to the brim with classic literature and textbooks. Titles included Dickins’ “A Tale of Two Cities,” Fitzgerald’s “The Great Gatsby,” Walter M. Miller Jr’s “A Canticle for Leibowitz,” Merrill’s “The Pushcart War” and many, many other authors including Camus, Dahl, Cather among others. 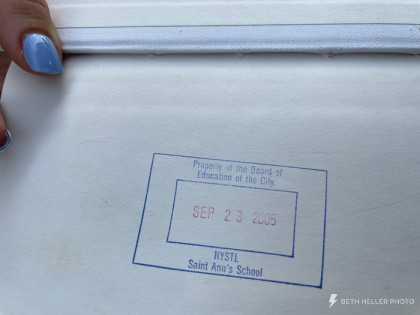 A stamp from the St. Ann School’s library.

And Buy Nothing was abuzz as members brainstormed how to save as many books as possible before the evening’s forecasted thunderstorms. “So many books dumped, lots of us trying to put them under covering or somewhere to bring tomorrow to BBB.” BBB would be Brooklyn Book Bodega a non-profit that promotes education equity and access to reading by collecting unwanted books and distributing them to underserved schools and neighborhoods. They have drop-off locations across Brooklyn including the latest addition (or “edition” as it were) to the neighborhood, Books are Magic. 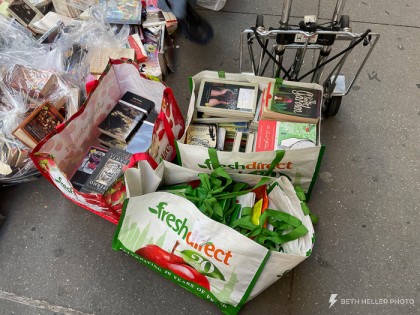 A Buy Nothing member worked diligently to collect as many books as possible as before forecasted thunderstorms arrived.

The blog asked a member of the St. Ann’s maintenance staff if they were aware of any donation attempts. He replied he thought the school had tried but didn’t know the extent of their efforts. Brooklyn Heights resident, Alexandra shared her disgust, “I had to do a double take…I saw piles, and piles, and piles of books, books that children need, that adults need…This could have been donated..they could have held a sale for charity…there are so many other things that could have been done instead of just throwing the books on the street.” 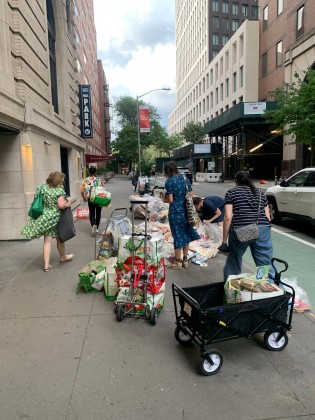 Members of the local Buy Nothing Facebook group collect the hundreds of books put on the curb by St. Ann’s School.

Long-standing research proves poverty is the single-largest contributing factor to the “achievement gap.” The blog would argue it should be called an “equity gap.” Case in point. The draconian cuts to the NYC DOE budget garnered huge public outcry and were recently reversed by an injunction. In contrast, St. Ann’s tuition starts at $51,000 a year for Kindergarten. A Tale of Two Cities indeed. 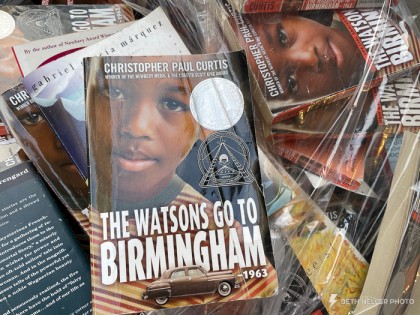 One of the many titles tossed to the curb by St. Ann’s School.

This is a developing story. The Blog will attempt to follow up with St. Ann’s Administration for their side and will also visit Buy Nothing for the fate of the literature. In the meantime, tell us your thoughts!

DISCLAIMER: The views expressed in the post are that of the reporter and do not reflect the opinions of the blog as a whole. The author is the parent of a special needs child and a vocal advocate for education equity.