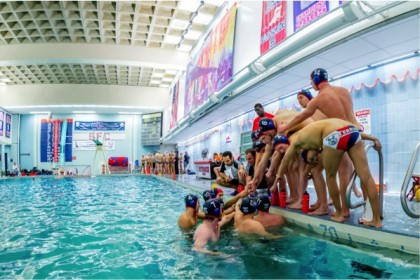 By brooklynheightsblog on October 8, 2014 11:43 am in Brooklyn Heights, Sports

Home cooking has been extremely favorable to the Terriers; over the past eleven years they’ve dropped only one home match, a 14-11 loss to Harvard last year which snapped a string of 31 consecutive home wins. Harvard will return to face St. Francis on Saturday, November 1st at 4pm.

“Iona is a team that takes the best out of these situations and will look to maximize the pool size to their advantage.
However, if we keep our composure and execute our game, I believe that we have enough quality to handle anything that they may throw at us tomorrow.,” said Mihaljevic, now in his second year leading the Terriers.

Besides defending their home pool, a winning home record will help St. Francis in its pursuit of a 10th Northern division title in the past eleven years. The Terriers—ranked 20th in the latest CWPA 2014 Men’s Varsity Poll—look to capture their third straight CWPA Championship and winning their division will greatly assist in that effort. Winners of the CWPA’s three divisions—Northern, Southern Division East and West—receive higher seeding at the Eastern Championships to be held on November 21, 22 and 23 at the U.S. Naval Academy at Annapolis.

All matches are free and open to the public. For more information about this an other St. Francis Brooklyn athletic events, please visit www.sfcathletics.com or call 718-489-5490.