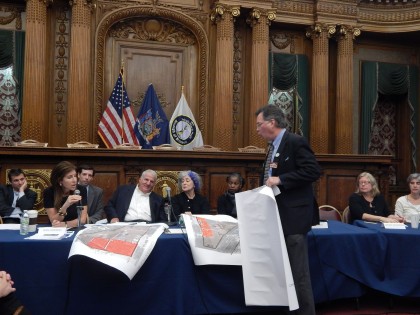 BPL’s Johnson Holds Her Own Against Opponents of Heights Library Plan; Smorgasburg and Brooklyn Roasting Company Named as Retail Tenants

By brooklynheightsblog on October 8, 2014 11:29 am in Brooklyn Heights, Development, Real Estate

Last night in the third floor Community Room at Brooklyn Borough Hall, the Brooklyn Heights Library Redevelopment Project was exposed to public scrutiny for the first time. In a dress rehearsal for the official community appeals process the much-debated project will need to pass through before becoming reality, members of the project’s Community Advisory Committee (CAC) as well as the general project took the opportunity to praise—and condemn—the multimillion dollar proposal.

Despite CDL efforts to the contrary, the evening’s presentation confirmed that BPL has crafted a well-thought out and realistic proposal to replace an aging but extremely popular local library at one of Brooklyn’s most expensive real estate addresses. 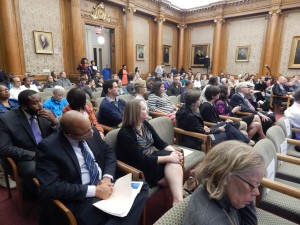 In the first meeting of the Brooklyn Heights CAC since BPL announced the selection of the Hudson Companies to develop and Marvel Architects to design a residential tower containing an entirely new library on the Brooklyn Height Library branch’s Cadman Plaza West location, Borough Hall’s largest public venue was filled with community residents eager to hear what BPL has in store for its local branch.

The CAC, whose members are drawn from community groups and politicians representing the Brooklyn Heights and DUMBO neighborhoods, were presented details of the winning proposal. CAC Chair Peter Aschkenasy noted that a selection process beginning in December 2013 had resulted in 150 hours of deliberation by various BPL committees tasked with overseeing an process that narrowed 14 architectural proposals down to a single finalist.

The Hudson Companies’ bid is for a residential building that may tower as high as 40 stories over its triangular site flanked by Cadman Plaza West and Clinton Street on the cusp of the Brooklyn Heights historic district. In return for one of the more prominent architectural parcels in the area, Hudson Companies agreed to pay the City $52 million dollars.

The City will turn over those proceeds to BPL, which will also get a two-story shell for a completely new branch within the new tower, a library that will continue as city property. Hudson will also provide an interim library space—to be located 5 blocks away at Our Lady of Lebanon Church—as well as 114 units of affordable housing built at a different location in District 2, housing that must be completed at the same time as the approximately 130 luxury residences on the library site.

Brooklyn Heights resident David Kramer, Principal, the Hudson Companies, specified that the new library’s entrance will remain on Cadman Plaza West, and that to a five-story deep parking garage will be there also. The entrance to the residential tower—flanked by two small ground-floor retail spaces containing Brooklyn Roasting Company and Smorgasburg—will be located on Clinton Street. Kramer also said that St. Ann’s School, a local K-12 institution across the street from the library site, will purchase a below-grade gymnasium space in the building.

While the CAC as a whole appeared favorably disposed to a proposal that was publicly announced two weeks ago, individual members offered pointed questions about a complex transaction that will ideally provide BPL with as much as $40 million dollars for capital repairs and technology upgrades throughout the financially strapped institution’s 60 branches.

BPL is responsible for promoting the literacy for the community in any manner they are comfortable; we want the children of Brooklyn to have strong memories of what a library is about.
BPL President Linda E. Johnson

Mr. Kramer explained that the NYC Economic Development Corporation (EDC), which will oversee construction for the City, insisted that the new library’s HVAC equipment be entirely maintained by the building condominium corporation, not BPL.

Doreen Gallo, CAC member representing the DUMBO Neighborhood Association, expressed dismay regarding community involvement with the approval of the Hudson Properties proposal. To great applause, Ms. Gallo explained that much of the community is against the sale of the property for housing, mainly because of the lack of infrastructure to sustain additional residents.

Pointing out that because the CAC hadn’t met since spring, the project was approved without CAC input, Ms. Gallo also questioned BPL’s estimate that $9 million was needed to repair the Brooklyn Heights branch’s failed HVAC system. 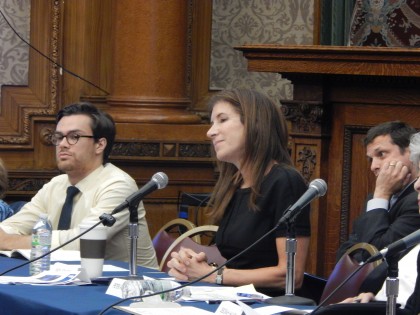 Ms. Johnson coolly responded that Gallo was not not the first person to disbelieve that number, stating that New York City Council Member Steve Levin was directed to the NYC Department of Design Construction which not only verified that figure, but specified that $9 million was in fact a conservative estimate.

Ms. Gallo then cited the Dock Street project in DUMBO as an example why community opponents have little chance of altering a project once it advances to the City’s Universal Land Use Review Process (ULURP), an important future milestones for the BH Redevelopment Project.

Johnson defended ULURP as a primary means for the public commentary while also mentioning a series of as yet unscheduled build-out meetings to be held at the BH branch. These sessions, open to the public, will allow further community input on the new branch’s design, roughly estimated at $10 million.

When the floor was opened to public comments, a floodgate of negative opinions about the project was unleashed, with BPL’s Johnson the focal point of the dissenting public’s ire. Justine Schwartz, a persistent critic, complained about the “piddling” price paid for the site, benchmarking her opinion against million dollar parking spaces in Manhattan.

Marie Rocha asked precise questions about how the AMI (Area Median Income) for the affordable housing component will be determined, explaining that the offsite location for below market rate units was a new version of the “poor door,” a reference to other NYC residential projects that have separate entrances for luxury and affordable housing residents.

In response Mr. Kramer specified that the AMI percentages were tiered at 60, 80, 100 and 105%. Later he also clarified that EDC has specified that no tax abatements will be offered to purchasers of the market rate condominium units. 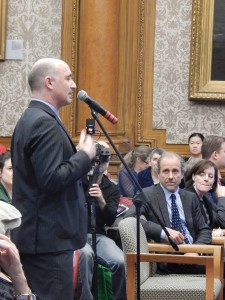 In one light-hearted moment, Ms. Johnson petitioned the crowd for quiet so she might finish explaining a particular point. A shout of “No!” came from the project’s assembled opponents, causing the BPL president and others to chuckle.

Then Michael White stepped up to the microphone. Brandishing poster-size images of the losses of public space that his organization believes is at the project’s core, White, who founded Citizens Defending Libraries with his wife, Carolyn McIntyre, proceeded to turn the steely Ms. Johnson into a sympathetic figure.

With his voice rising – first for dramatic effect but ultimately in what appeared to be unrestrained fury, the CDL spokesman attempted to shout down the BPL president and any any opposed to his view that the library sale was a misguided financial decision that will only net untold millions for the developer and any consultants connected to the project.

Following White’s virtual soliloquy, Mr. Kramer explained that the Hudson Company’s contract with EDC specified that any and all consulting costs would be borne by his firm. Kramer also pegged the actual value of the project at $70 million, including interim library cost and all steps necessary to complete the project by the three year deadline imposed by the EDC’s RFP.

The final person to step to the microphone was Mike Murphy, who explained he was relatively new to the community.

Striking a positive if somewhat naïve closing note, Mr. Murphy said, “I’m excited for public commentary. It’s a tough process ahead but worth it because the library we’re going to get will be better than expected.”