In the only air conditioned space in the Brooklyn Heights Library building, Brooklyn Public Library president Linda E. Johnson and BPL staff presented the future of the much-debated library branch that has been serving Brooklyn Heights since 1962.

The Hudson Companies and Marvel Architects (designers of the Pierhouse and 1 Hotel at Brooklyn Bridge Park) have been identified as the development team of choice for a new residential tower on the library site that will include a new branch for BPL. The developer’s proposed bid of approximately $60 million would not only allow BPL to invest $10 million in outfitting a 21,000 square foot library but will allow for $40 million in capital funding for other needy branches in BPL’s system as well as an 8,000 square foot temporary library to be located at Our Lady of Lebanon Church (113 Remsen Street).

A final vote on the proposal is scheduled for BPL’s board meeting to be held at 5:30 tonight at the Library’s Grand Army Plaza location.

An interesting twist presented today by Ms. Johnson is that as part of the proposal The Hudson Companies will build 114 units of affordable housing in Community Board 2. The BPL president explained that the housing will not be located in the new tower—which will comprise market-rate housing in one of the most exclusive communities in Brooklyn—but will be simultaneously built at a location different from that of the new tower. 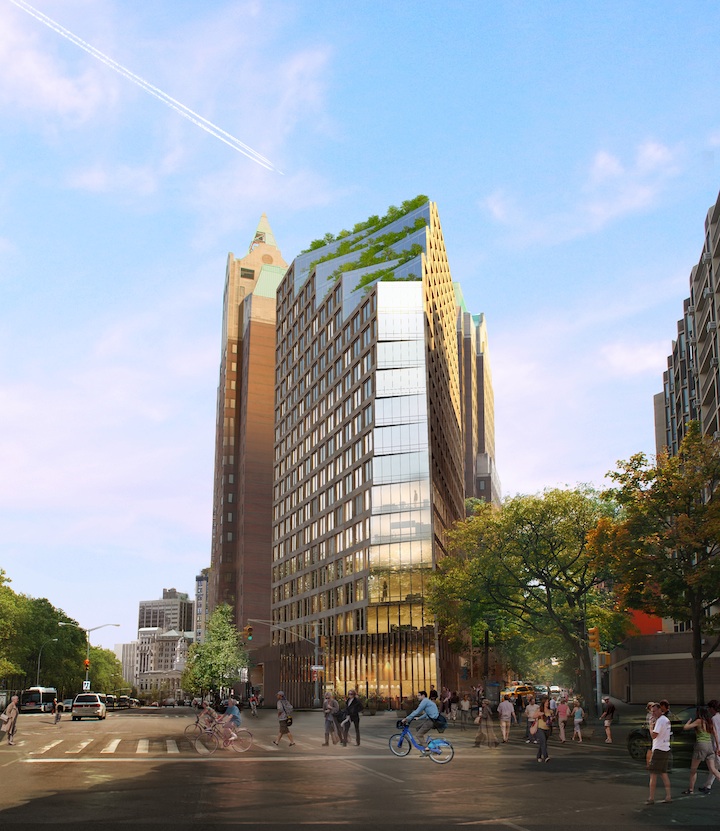 Johnson stressed a linkage between the two construction projects, insisting that the luxury housing on the library site will not be occupied until the affordable housing units—which will be new construction—is completed.

“We’ve thought about this thing form every angle,” said Johnson, “and the Mayor has made it very clear that the number of affordable housing units [in the city] is shamefully low… so this was an important consideration” in the proposal by The Hudson Companies.

Ms. Johnson clarified that developer must have identified and have control of a specific site for the specified affordable housing by the time that the project is ready for ULURP.

“What we are doing is building a new, exciting library here in the Heights that the community will actually like,” said Ms. Johnson.