The three Democrats vying to succeed the retiring Joan Millman in the 52nd NYS Assembly district met for a debate in Prospect Heights last night. The New York Observer’s takaway? The candidates are a little “meh” about Governor Cuomo: 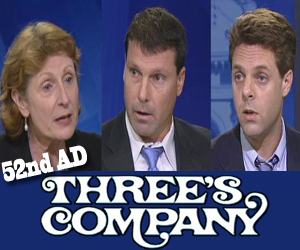 NY Observer: “The governor has been enormously against the community on LICH,” said Ms. Simon, adding she was she was still unsure who to support. “I’m watching Zephyr Teachout’s campaign very closely.”

Mr. Sikora and Mr. Biviano, on the other hand, were completely unambivalent.

“Undecided, really? Teachout, no question,” said Mr. Biviano, noting Mr. Cuomo’s relationship with the family that owns the Fortis Property Group, which won the bidding war to buy and develop the hospital. “Cuomo took tens of thousands of dollars from people associated with Fortis.”

Mr. Sikora had some mild praise for the governor for signing same-sex marriage into law, but attacked him over his center-right fiscal policies and the reports that his aides interfered in the workings of the anti-corruption Moreland Commission. Mr. Sikora enthusiastically said he would vote for Ms. Teachout.

“He’s failed to reform Albany. The Moreland Commission revelations have been just terrible,” said Mr. Sikora. “I broadly don’t agree at all with his approach on economic issues.”

The Brooklyn Eagle was also there and provides a wider report here.