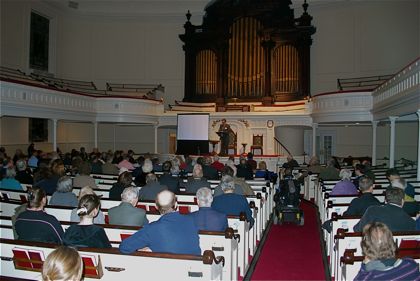 Brooklyn Heights in 2009 will be about preserving the neighborhood’s landmarks and property values, and it’s fair to say everything the community hoped and wished for in 2008 did not always go as planned, Brooklyn Heights Association President Tom van den Bout told a packed crowd last night.

“I hereby officially call for a ‘do-over’ [of 2008],” van den Bout said. “Not that last year was a total disaster, but let’s just say it did not quite go as planned.” [PDF of the minutes from the meeting]

We spoke with van den Bout after the meeting last night to get his full thoughts on what lay ahead:

What will 2009 bring for Brooklyn Heights?
“I think that the economic crisis and that sort of downward pressure of the value of everything, and the money that people have, will have an effect on their ability to maintain their house, or do renovations. We already have a number of properties in the Heights that have been neglected for years for a number of reasons and those aren’t going to get any better. And some of them are in pretty bad shape. So, I think that’s going to be one of the main things from a preservationist standpoint, but we’ll see what happens.
“I don’t think we have any development proposals within Brooklyn Heights as a district itself that are on the way, but you never know what the next day brings.”

Van den Bout also discussed the ramifications of a situation in the West Village in which St. Vincent’s Hospital is proposing to demolish a landmarked structure because of financial hardship.

“It sets a precedent for any nonprofit that’s under financial strain — which many of them are — and they can bring forward that hardship and potentially demolish the building [because] they have a precedent to base that on. Suddenly all things that we recognize as landmarks today — churches, museums, concert halls — those become our softest sites.”

At other points in his report at the meeting, van den Bout vowed that the BHA will keep searching for a new middle school site within the district, despite the fact that the controversial Dock Street mixed-use development project — which would include a public middle school — is halfway through its six-month public review process.

Also noted was last year’s concern of the steep rise in land values and development pressures in the neighborhood. “That problem, through a series of very unfortunate events, seems to have solved itself,” he said, as the audience chuckled.

Van den Bout also pointed to the NYC Waterfalls exhibit, which, while the manmade waterfalls were exciting, the city “sadly underestimated the power of wind” and the salty spray damaged plant life along the Promenade. The fate of those plants will be known in the spring.

In the year to come, van den Bout noted the BHA will unveil a newly-designed Web site and listserv. In terms of advocacy, van den Bout said he hoped this would be the year to see a pilot residential permit parking program, and that the BHA landmarks committee is “keeping a close eye” on developer’s plans for the Riverside Apartments near the corner of Columbia Heights and Joralemon Street.

Several residents were also honored with BHA Community Service awards last night, and newsstand man Mohammed Afrahim received the “living landmarks” humanitarian award for his friendly attitude and smiles from his stand at the corner of Montague and Henry streets.

Lastly, the New York Times Chief Financial Correspondent, Floyd Norris, spoke candidly about the financial crisis and how the solution is to create a new financial system with better regulatory oversight. And, that he is confident that our current government will make sure of it.