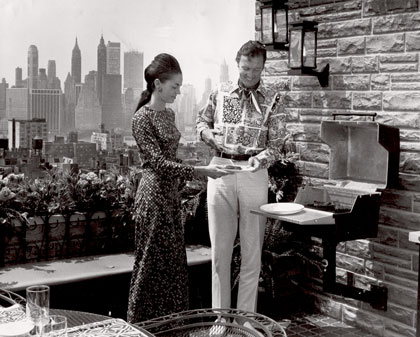 From Poppa Fink’s archives comes this promo shot of former NYC Commissioner of Public Events/ Knicks star Bud Palmer BBQing atop a building somewhere in Brooklyn Heights circa 1971.   The address of the BUG photo lab is stamped on the back of the picture: 195 Montague Street.  According to Pops, the shot was used in Brooklyn Union Gas pamphlets.   Palmer, who earned an honorary salary of $1 per year working for the city paid the bills as an ABC sportscaster and spokesperson. Anyone have an idea on where this was shot?