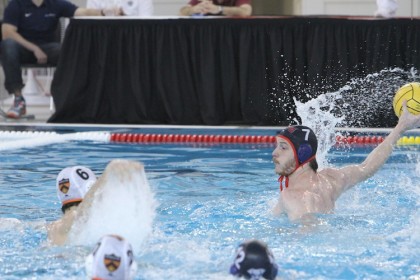 St. Francis now awaits the identity of its opponent for an NCAA play-in game on Thursday, December 5, at Stanford University. The Terriers will most likely play the Western Water Polo Association (WWPA) champion for a berth in the 2013 NCAA Championship Final Four.

St. Francis Head Coach Srdjan Mihaljevic, soaking wet after a customary victory leap in the pool, was elated by his team’s effort against a strong Tiger squad. “My hat goes out to Princeton, they had a really quality team,” said Mihaljevic, who was selected the Dick Russell Coach of the Tournament. “We had our hands full but came out on top. The guys are happy, I’m happy, we’re going to California.”