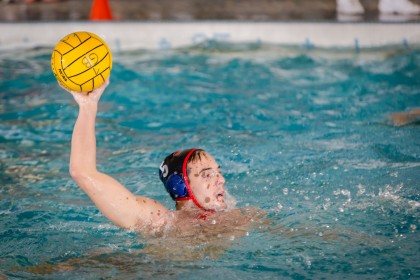 Michael Randazzo writes about local sports including LIU Blackbirds hoops and St. Francis Terriers water polo. He wanted to get the word out about the upcoming men’s water polo tournament. Here goes!

When the St. Francis men’s water polo team hits the water at Brown’s Moran Coleman Aquatics Center this afternoon in the first round of the 2013 Collegiate Water Polo Association (CWPA) Championship, the Terriers will be looking to qualify for back-to-back NCAA tournaments, an accomplishment unprecedented in program history.

The East’s reigning water polo champions will begin the defense of their 2012 CWPA title with a 4 p.m. match against either Johns Hopkins or George Washington, the first of three matches that will determine if the Terriers will claim their fourth CWPA title and with it an automatic berth in the 2013 NCAA Men’s Water Polo Tournament at Stanford.

Winning the East is never easy and standing in the path of top-seeded St. Francis are formidable contenders, including second seed Navy, third seed Harvard — which already owns two wins over the Terriers this season—and host Brown, seeded fifth in the tournament and ranked 20th in the country.

But St. Francis, ranked 13th nationally, boasts one edge that may perhaps propel the Terriers to a title: senior Igor Mladenovic, the East’s best goalie and arguably the finest netminder in St. Francis’ history, who is playing in the final CWPA Championship of his storied collegiate career.

“Igor is an unbelievable athlete … a difference maker,” said St. Francis Coach Srdjan Mihaljevic of his senior goalie. “What he was able to do for us this season was just short of remarkable. He was plagued with a health issue throughout the season … [but] I feel so confident with him in our cage, even if he is not 100%.”

With a number of strong competitors who “don’t want to lose at anything,” Coach Mihaljevic believes that no matter what the outcome of this year’s CWPA Championship, “we’re going to make sure that we do everything we can to win.”