Not Kosher on Clark Street 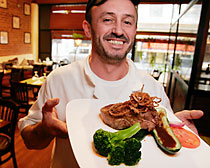 NY Post: Unkosher Sex Rap vs. Deli Man: A well-known Brooklyn kosher deli owner was busted for allegedly forcing himself on an 18-year-old waitress in the basement of his new eatery – and then calling to harass her after she quit, police sources said yesterday.

The deli man, who for 10 years ran the Pastrami Box near Brooklyn Supreme Court until closing it in May due to rising rents, was arrested Saturday.

The waitress – an NYU student by day – called cops to complain that her married boss had plied her with alcohol and asked her to have sex with him after she finished her shift on Nov. 26.

When the woman refused, Domgjoni grabbed her by the head, pinned her hands down and tried to kiss her, police sources said.

He then shoved his hands down her underwear and groped her, before the woman managed to break free and escape, sources said.

The waitress immediately quit her job – but Domgjoni allegedly kept after her, phoning the frightened woman about three times a day from Nov. 26 until Dec. 8, the day after she made the complaint to cops, police sources said.

The Little House that Could
Henry Street Woes