Heights History: Wild in the Streets 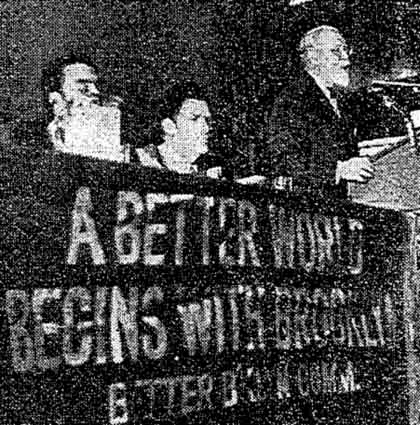 Inspired by the prospect of a return to 1970s economics last week,  we wrote about the Bad Old Days at 55 Pierrepont Street.  This week we get in the BHB Time Machine and look back to February 1, 1971 when “outsiders” were causing the crime rate in Brooklyn Heights to skyrocket.

Martin Gansberg wrote in the New York Times about a Town Meeting at the Hotel St. George presented by the Better Brooklyn Committee  for residents concerned about the increase in purse snatchings, muggings and drug addicts in the neighborhood.

The 84th Precinct’s Captain Robert Geary tried to explain the NYPD’s predicament by saying there was “no cure” for the crime wave. “It’s something like the problem a physician has,” he said. “He recognizes the symptoms and he can write a prescription that will help ease the pain, but a complete cure does not seem possible.”

The event drew such a large crowd of “artists, writers, lawyers and teachers” as well as “dowagers wearing fur coats and hats” that the meeting needed to be moved from a smaller second floor space to the hotel ballroom.  A 25-man American Legion band was on hand and played a march as attendees slowly shifted to the larger hall giving the event an old-time feel.

But it was far from the good old days for some. The Times quoted a “man on crutches” as saying, “There has been change in Brooklyn Heights.  Some of the brownstones are boarded up.  The hotels don’t do the business that they used to.  In fact, some of the hotels [The St. George, the Frankin Arms and the Margaret Hotel] are used to house welfare families.  Many of their children roam the streets at night.  Things are not what they used to be.”

Despite that statement most residents at the meeting pointed the finger of blame for the spike in crime at “outsiders” and not the welfare hotel residents.

Dr. Benjamin A. Rosenberg of the Better Brooklyn Committee urged residents to band together. “You can’t fight a problem by running away from it, ” he said. “You have to face up to it.”

The meeting ended with residents agreeing to meet further with law enforcement and to work on ways to curb crime.